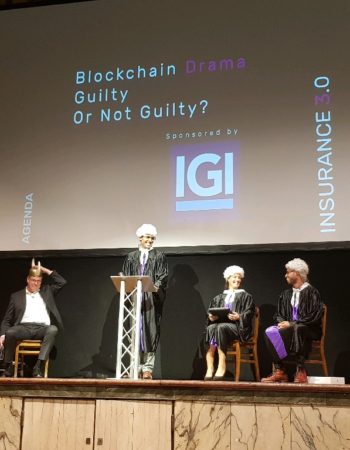 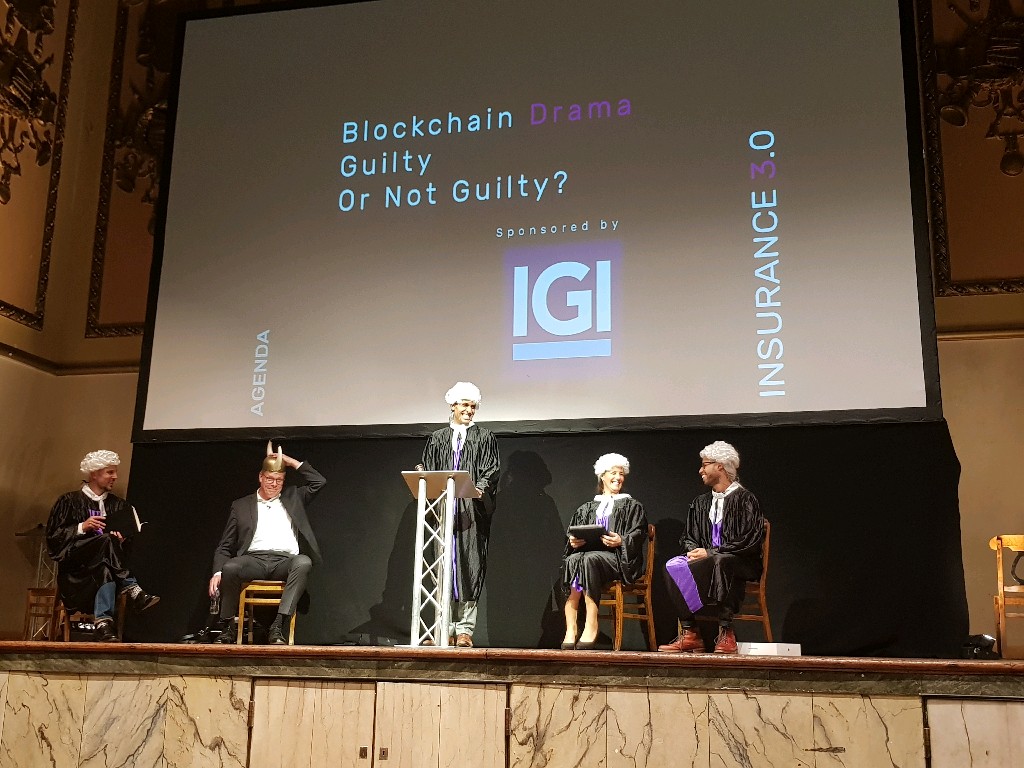 On the 21st of September, Walid Al Saqqaf, founder of Insureblocks, was invited to participate at Market Minds, Insurance 3.0 conference, to participate in a court room drama where blockchain is taken to court for being overhyped. Walid played the role of the judge, Ben Davis (prosecution), Madeline Bailey (defence),  Lars Henneberg (fact witness) and Elliott Callendar (expert witness).

If you are familiar with the Gartner Hype Cycle for Emerging Technologies, you may have noticed that the general consensus is that Blockchain is currently in the ‘trough of disillusionment’ part of the hype cycle – it is expected to take 5 to 10 years to reach the ‘plateau of productivity.’ 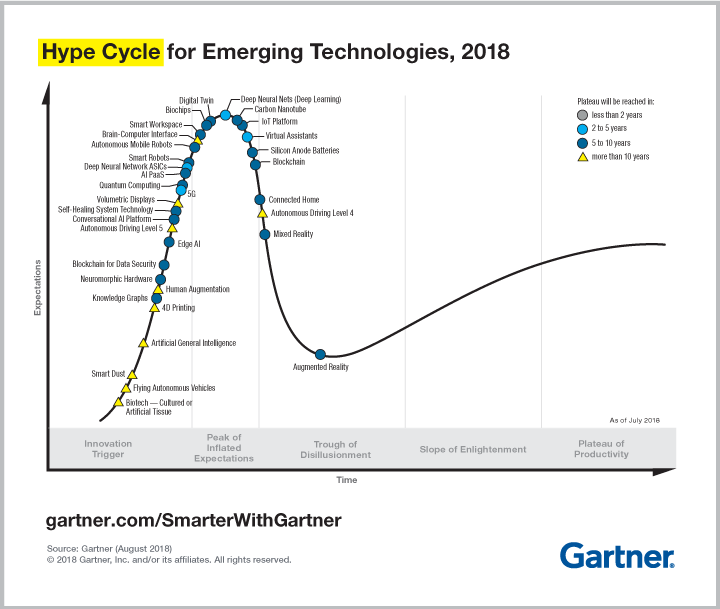 Notice in the image above how Blockchain is moving through the ‘trough of disillusionment.’ Many POCs (Proof of Concept) have been launched by firms, however, there is little information in the public domain about the cost, time and effort efficiencies resulting from such projects. This has led many people in the insurance industry to believe that blockchain is all hype.

“Trust takes years to build, seconds to break, and forever to repair.” – Anonymous

Trust is the bedrock of the modern Insurance industry– customers are willing to pay premiums upfront to an insurer as they trust the insurer to pay some future benefit in the event of a pre-defined contingency.

Unfortunately, lengthy policy documents full of industry jargon, painfully slow claims processes and an awful amount of paperwork for even the slightest change has shaken customer trust in insurers – an article published by Insurance Times stated that almost half of customers in the UK do not trust their insurer to pay claims.

Blockchain provides an opportunity for (re)insurers to regain customer trust- Fizzy by AXA is an excellent example.

In the words of Laurent,

“it is not AXA that is deciding whether or not the customer is to be indemnified but instead it is a smart contract that makes this decision.” – Laurent Benichou

Laurent pointed out that many people do not file for a claim when their flight is delayed because of the hassle involved in the claims process under a traditional flight delay insurance policy.

“A customer is the most important visitor on our premises. He is not dependent on us. We are dependent on him. He is not an interruption in our work; he is the purpose of it. We are not doing him a favor by serving him. He is doing us a favor by giving us the opportunity to serve him.” — Mahatma Gandhi

The level of customer dissatisfaction with insurers today is highlighted in the World Insurance Report 2018 which states that 30% of people globally would buy an insurance product from a large tech firm rather than a traditional insurer because of poor customer experience.

Blockchain provides an opportunity for (re)insurers to improve the customer experience – Insurwave is an excellent example.

At Insurance 3.0, Lars shared with the audience some facts about Insurwave along with his personal learnings from the implementation. It suffices to say his words were well received by the audience.

In the words of Ken Marke, Chief Marketing Officer at B3i, “it is time to move blockchain out of the innovation lab and into the business.”

A World Economic Forum report states that 10% of the global GDP will be on blockchain by 2027. Given this fact along with the success of Fizzy by AXA and Insurwave, you cannot afford to ignore blockchain in the insurance industry and dismiss it as all hype. At Insureblocks, we believe the time to act on blockchain is now and we hope the advice given by Lars will guide you in implementing blockchain successfully to resolve pain points in your business.