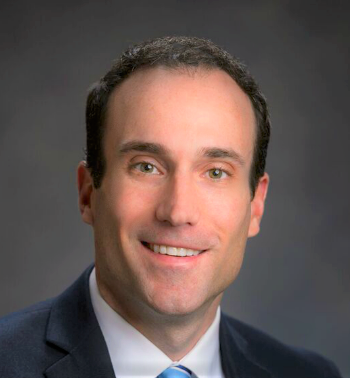 Ep. 111 – COVID19 and the economic downturn’s effect on P&C insurance: An opportunity for technology? 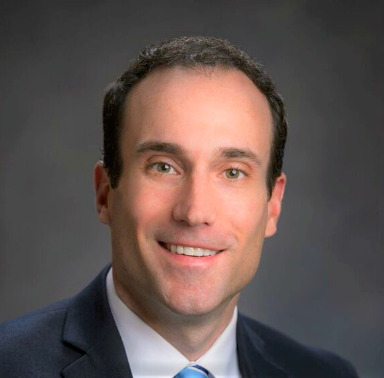 Patrick Schmid is the Vice President of The Institute’s RiskStream Collaborative a risk management insurance blockchain consortium. In this podcast Patrick discusses with us the impact of COVID19 and the economic downturn’s effect on P&C insurance and whether or not this represents an opportunity for technology.

Blockchain is a distributed ledger that maintains a constantly growing list of chronologically added records in the form of blocks. Blocks contain data such as transactions or smart contracts. They’re verified and confirmed through a decentralised consensus process. This process is why blockchain is often seen as providing the decentralisation of trust without the need for an intermediary or a centralised party.

In this period of economic downturn, due to COVID19, Patrick believes that blockchain can provide the much-needed operational efficiency at a time when privacy and security are of high concern.

Medium article: COVID-19 and the economic downturn’s effect on P&C insurance: An opportunity for technology?

A board member of The Institute challenged Patrick and his team to think about the impact COVID19 would have on insurance and how to think about RiskStream’s strategy for the remainder of the year. This prompted, along with Patrick’s concern about the economy to write the article: “COVID-19 and the economic downturn’s effect on P&C insurance: An opportunity for technology?”

The article analyses the economic impact of the outbreak of COVID19 and the lockdown is having on the US economy and the fallout it will have on the P&C insurance industry. It looks at how it will strain underwriting profits and the impact a decline in interest rates and financial markets will have on net investment yields.

40% estimated fall in US GDP

In the first quarter of 2020 GPD was estimated to have declined by 4.8% with JP Morgan predicting an estimated 40% fall in GDP in Q2. According to the US Department of Labour US unemployment rate rose to 14.7%, an increase of 20m in April, representing the highest unemployment rate increase since the Great Depression. Some economists are predicting that the unemployment rate could increase to 30% before this pandemic peaks. This has led to an unprecedented rise in unemployment claims with an additional 3m claims on the 14th of May bringing the total to 36m.

Source: US Bureau of Labor Statistics

Whilst the P&C industry as a whole has taken these events in its strides it isn’t insulated from the economic fallout.

The impact on business activity is expected to be felt in commercial lines and the effects from declines in residential activity and consumer activity in general, are expected to show up in personal lines.

The effects are expected to impact the P&C combined ratio through changes to premiums, losses and expenses.

A combined ratio above 100 indicates the industry is paying out more money in claims then it is making from policies. Due to effects on policies and losses the industry should expect an increase in the combined ratio. Adding to industry stress, net investment yields are likely to decline as well. The industry typically invests very conservatively, so interest rates are a good measure to track as a proxy.

On the 15th of March the US Federal Reserve in its most dramatic move since the 2008 financial crisis announced it is cutting its benchmark interest rate to near zero and said it would buy $700bn in Treasury and mortgage-backed securities as it attempts to head off a severe slowdown. 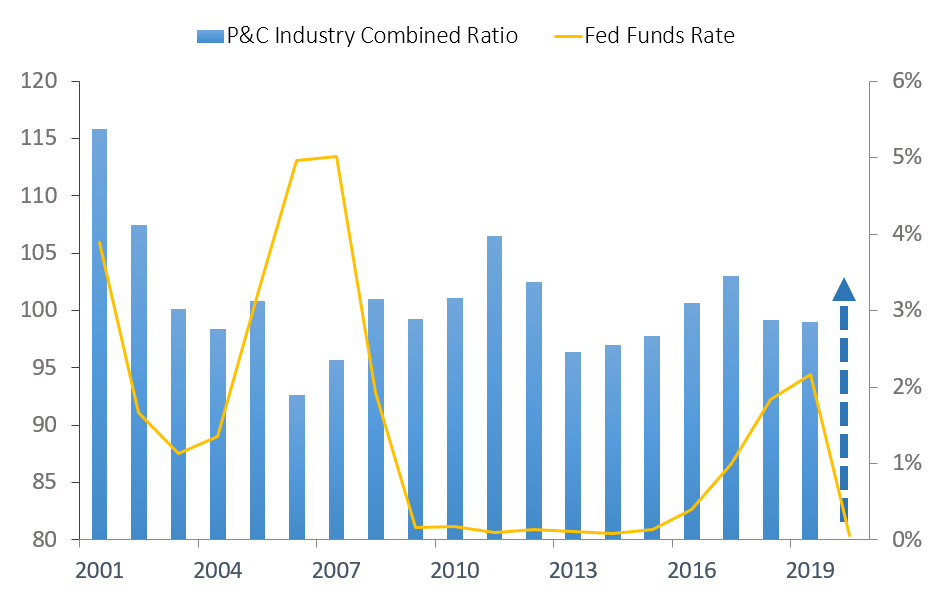 Patrick has seen a distinction between different areas of P&C lines due to the crisis.

He believes there will undoubtedly be changes in the demand for insurance and the new environment will lead to alterations in insurance claims and losses. Down the road, this may also lead to changes in regulation and could even generate new business models.

Premiums are likely to contract across a variety of lines of insurance as the economy weighs on new exposures and causes early policy cancellations. General auto and air traffic will decline as more people stay home. The increase in unemployment will likely show up in reduced premiums for personal auto, aircraft and commercial auto.

In the UK and in the US a number of auto insurance carriers are providing refunds to policy holders due to the reduced amount of driving.

The rise in unemployment claims along with new work-from-home environment may result in businesses cutting workers compensation policies.

Patrick believes that due to some of the policies being enacted in the US homeowners and mortgage guarantees will have some short run stability. But unfortunately, long term, there’s definitely the risk for foreclosures spiking leading to credit, mortgage guarantee and surety losses expected to increase.

Homeowners may see a slight uptick in losses as more residential activity takes place at home, due to school cancellations and work-from-home policies, thereby increasing risk. Patrick mentioned his own personal risk of his son trying to light a candle one evening!

Business interruption coverage, which can be included in property coverage, is an area of question. This coverage indemnifies companies for lost profits for non-excluded risks, yet outbreaks of disease are generally excluded. Certain policies include coverage for “interruption by communicable disease.” Even with this language included, some policies still exclude contamination due to a pathogenic organism, bacteria, virus or disease. There are a lot of elements to consider with this issue. Therefore, it is likely there will be challenges and litigation related to business interruption.

Is the pandemic a catalyst for tech-adoption in insurance?

The P&C insurance industry, like many others, was thrust into a new business environment due to the global pandemic. Within a week a relatively manual and conservative industry, which relies heavily on face-to-face interaction, showed an impressive ability to adjust and leverage technology to continue to provide products and services.

While some firms within the insurance industry had already made good headway in tech-related innovation and automation prior to the pandemic, the industry as a whole has continued to be somewhat reluctant to adopt emerging technologies. The pandemic and the associated economic fallout may wind up being the key catalyst for widespread tech-adoption within insurance.

Prior to the pandemic the stage for large-scale technological adoption within insurance was already set. While the economic downturn will lower the quantity of available start-ups and InsurTechs, the quality and adoption of technology whether it’s from a start-up or from an incumbent leveraging technology may actually increase.

In addition, the count of internal projects for brokers, carriers and reinsurers leveraging new technologies has been rising over the past few years.

Overall Patrick believes that the insurance industry will most likely see an increase in tech adoption when this pandemic plays itself out.

A lot of the carriers (brokers and reinsurers) representatives at the RiskStream Collaborative work within innovation departments have been leveraging new technologies over the last few years. However, in spite of having understood the importance of innovation few had moved their projects to production usage.

On the 5th of March 2020, the credit agency, AM Best released its Scoring and Assessing Innovation methodology. It explains that these company-specific innovation efforts are likely to have a long-term impact on an insurer’s financial strength. Put differently, in order to profit maximize, insurers need to innovate and they need to do it now.

Will the pandemic herald an increase in usage-based insurance (UBI)? 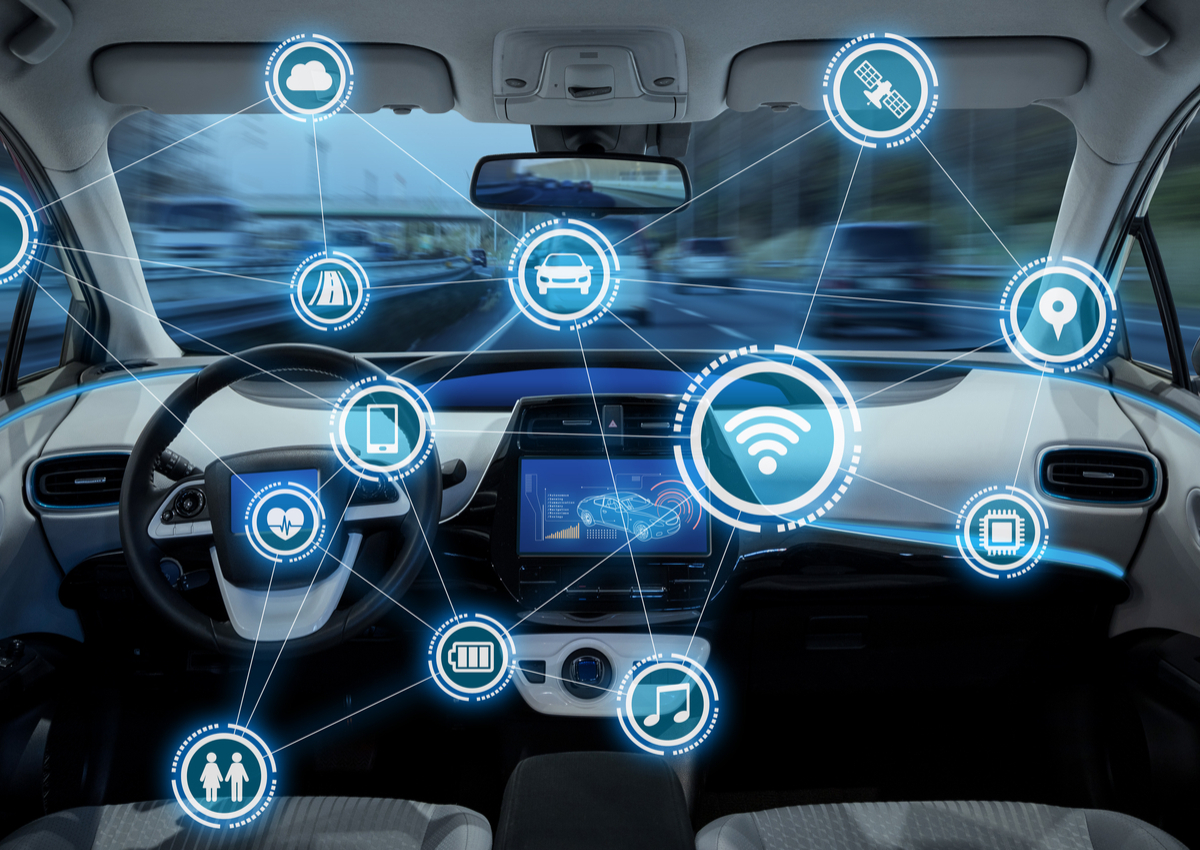 One of the constraints to technological adoption within insurance has been lack of customer adoption. Telematics has been around for a long period of time, but never experienced robust demand. It’s possible the pandemic could change this.

Due to the pandemic related lockdown, miles driven has collapsed and more customers are now unemployed, leading to auto insurers around the world issuing refunds to their customers.  Telematics and Usage-Based-Insurance (UBI) may provide angles for auto insurers to maximize retention of policyholders. Whilst there are still some concerns regarding the data security risk the cost-benefit for consumers to exchange private information for a reduced rate is likely to be changing as well.

The opportunity to leverage blockchain type applications may help in this endeavour to reducing the data security risk and thus increase the adoption of UBIs.

Earlier this year, Christopher McDaniel, spoke on Insureblocks about the Paths to the Risk Singularity, the point where data, intelligence and process transformation have become so advanced that the risk management industry undergoes a dramatic and irreversible change.

Patrick believes that Christopher’s vision is 15 years in the making but one of the key themes that will need to be addressed is around security.

One major challenge with consumer and business-adoption of internet connected devices, like those proposed with UBIs, has been the security risk. There are still some concerns, but security is slowly improving and the risk is becoming more manageable. It’s likely that there’s a methodical upturn in IoT usage over the next few years, but any increase in insurance usage will deliberately focuse on areas where security is tight.

Certain insurance lines are expected to see an increase in losses, as mentioned earlier, as the economy continues its downward trend. Some of the increase may wind up being attributed to fraud.

AI and machine learning systems could potentially help reduce the cost of reviewing potentially fraudulent transactions identified by traditional rule-based systems. An additional benefit of cognitive fraud detection systems is that they can detect fraud patterns that humans may overlook. This can help save insurers money in a challenging economic environment.

Additionally, in an era where insurers are aiming to maximize policies while reducing expenses due to the economic downturn and remain profitable, AI could potentially help. Artificially intelligent systems have been developed to read contracts, assess which areas of potential risk, and even offer suggestions on how to improve the terms of the contract.

The thought being that, as carriers try to move towards increased operational efficiency within the insurance industry, AI and machine learning might be additional tools in the toolbox to help that process.

The Institute RiskStream Collaborative is a 501c6 non-profit consortium that was formed out of The Institute. The Institute itself is a 501c3 not-for-profit that was set up over a hundred years ago out of the Wharton School at the University of Pennsylvania. The Institute provides knowledge-based solutions with the goal to make the risk management, in the insurance industry, more efficient for industry participants and consumers.

RiskStream Collaborative is a collaboration of over 40 members, made up of some of the largest insurance carriers and reinsurers globally. The goal is to build real-world applications and use cases using emerging technology such as blockchain and distributed ledger applications.

The Institutes RiskStream Collaborative has been working with roughly 40 P&C and L&A insurance-related organizations to design use cases for life and annuities, personal lines, commercial lines and reinsurance over the past few years. RiskStream had expected a downturn in industry participation in our working groups and committees due to COVID, yet they have been surprised to witness more participation and robust growth within their working groups. This may be another signal that the pandemic and economic downturn is causing industry participants to re-evaluate the need for cost savings through technology.

RiskStream offers a number blockchain applications to choose from:

The timing of involvement in industry-wide initiatives may be also be ideal. RiskStream’s Proof of Insurance and First Notice of Loss solutions, have moved through multiple path to adoption steps with members. Therefore, the associated ROI is within reach as mentioned in a podcast we did with Patrick last year entitled: Calculating ROI on blockchain. Once adopted, it’s likely the path forged within these personal lines will allow for easier adoption of use cases being designed/built in other areas, such as commercial lines, reinsurance and life & annuities.