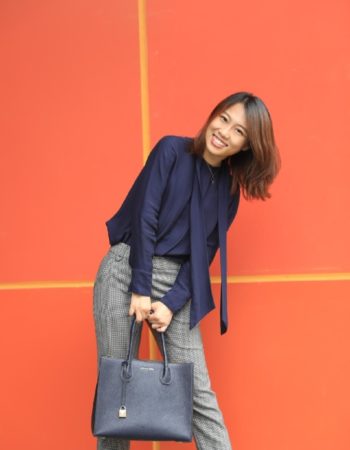 Ran Zhao is Founder of Blockchain Business Bridge and Innovation Officer at Innovation Centre Denmark, a public organization under Ministry of Foreign Affairs and Ministry of Higher Education and Science of Denmark. In this podcast Ran walks us through the opportunities blockchain projects have to expand in the Chinese market by sharing her experience of such a project for Danish companies.

The innovation Centre Denmark helps Danish companies to build up their innovation and technology development and connect them to international resources.

The Blockchain Business Bridge is a non-profit platform for knowledge exchange, and business communication between China, Denmark and the world. The project serves as a launchpad for Danish businesses to take their blockchain activities to the next level.

To define what is blockchain, Ran took us throough a journey across time. From the Stone Age to now trade and transactions have always been the engine of economic growth. Transactions however have become more complicated. Transactions are not just physical goods but services, solutions, stocks and property. The marketplaces themselves have also become more complicated. Technology has enabled trade to move from offline to online as it increasingly becomes more digital. Both the number of participants and locations of those participants has increased, thus complicating trade.

All this complexity leads to one fundamental problem, a problem of trust. To solve this trust issue, we have resorted to the use of centralised intermediaries such as banks, financial institutions and big companies who have excellent credit records.

Big corporates can invade your data privacy, financial institutions have gone bankrupt and banks can deceive us as recently demonstrated in the FinCEN files where major banks like JPMorgan, HSBC, Deutsche Bank and a number of other big banks have defied money laundering crack downs by profiteering from illicit funds from Russian oligarchs and drug lords. Centralised intermediaries are usually inefficient and have numerous points of friction creating increased transaction costs.

Commercial and industrial applications can be built on top of it to create a whole new ecosystem of digital economy.

The Innovation Centre of Denmark

Ran works at the Innovation Centre Denmark in Shanghai, part of the Trade Council of the Ministry of Foreign Affairs and Ministry of Higher Education and Science of Denmark, whose mission is to help Danish companies and higher education institutions explore possibilities in some of the world’s leading innovation hubs, such as in Shanghai, Silicon Valley, Seoul, Boston and Munich.

On one hand they help Danish innovative companies, start-ups and SMEs to enter and scale up in international markets. They help them improve their business models and polish the business plans and help them research of local industry players and potential partners / investors.

On the other hand, they pull the knowledge and experience from all their innovation hubs to Denmark to keep Denmark’s competitiveness, innovation and tech. Blockchain Business Bridget is an example of such projects by bringing the experience on how to develop a blockchain ecosystem and business model from China to inspire Denmark.

China is seen as a front runner of blockchain technology and applications. China has the highest number of patents in terms of blockchain and DLT. 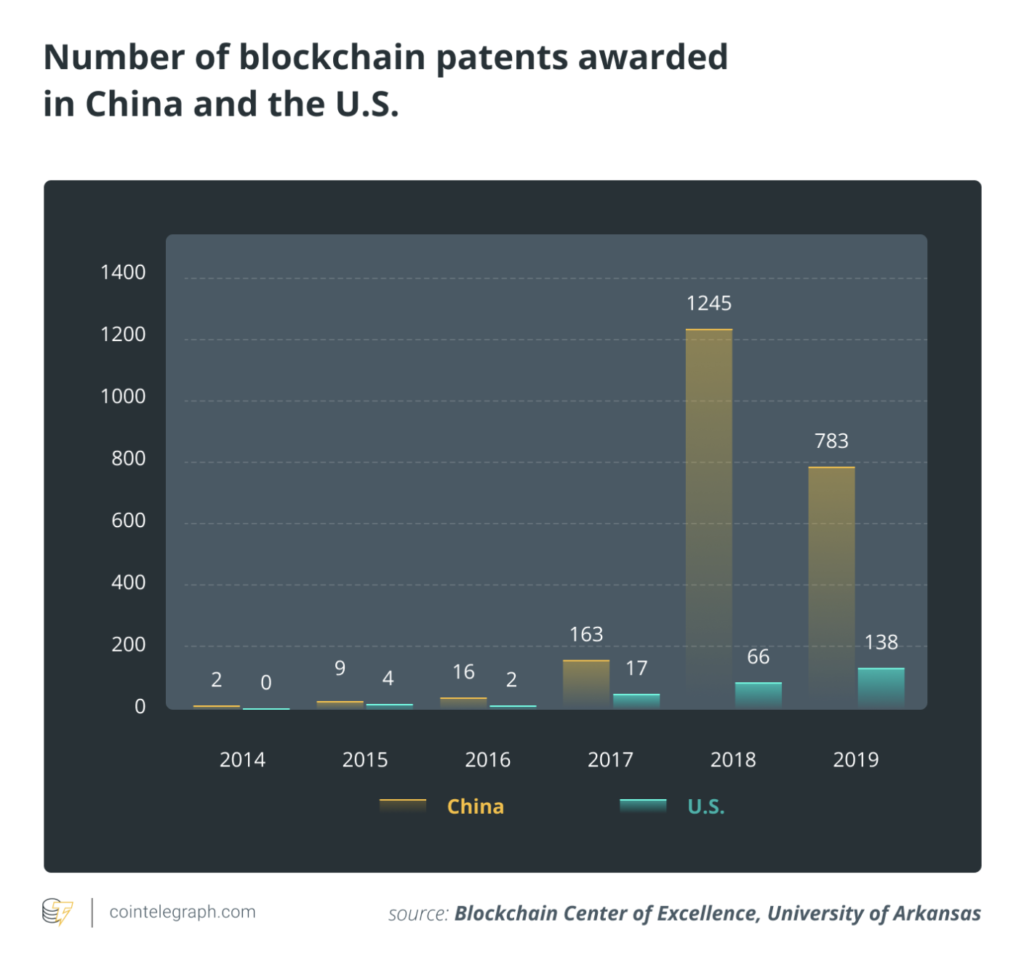 According to Coin Telegraph, from January 2014 to October 2019 the National Intellectual Property Administration of China has been awarded 2,218 blockchain patents compared to the 227 by the US Patent and Trademark Office.

China is also running a number of ambitious projects in both the public and private sector from information infrastructure to individual industrial applications. According to Ran this represents a unique opportunity for Danish businesses to learn from what is happening in China, get inspired and to explore application scenarios.

For that last 10 years, there has been a very top down approach from the political system in China for blockchain development. On the 24th of October 2019, President Xi Jinping emphasized the development of blockchain technology and called for more research, investment, and regulations: “Blockchain plays a core role in the next round of technological innovation and industrial transformation,” said Xi according to comments recorded by news agency Xinhua during a meeting with members of the Communist Party’s Central Committee Political Bureau.

Xi emphasized boosting research in blockchain in order to “help China stay on the frontline of theoretical, innovative and industrial aspects of blockchain and also occupy a seat in the global regulation-making process of the emerging technology.”

Xi said the technology should be expanded into other parts of people’s daily lives, like education, employment, health care, poverty alleviation, food safety, and other public services. “By using blockchain technology, the public are able to enjoy more convenient, intelligent and qualified public services,” he said.

In Denmark the situation is very different. When the Blockchain Business Bridge was set up, the traditional big Danish industry players were very hesitant to be the first ones to take the first step into blockchain technology as many to this day still confused it with cryptocurrency. Which is in stark contrast to the traditional Chinese companies who are competing between each other to be the first ones to adopt blockchain technology.

Blockchain Business Bridge really started from Ran’s personal interest in blockchain. In 2018, Ran invited four professors from Danish universities that had a focus on blockchain in addition to two blockchain companies:

They organised for the participants a tour around Chinese innovation hubs in Beijing, Shanghai, Yangpu, Suzhou and Xiang Cheng. Establishing dialogues with local policy makers, blockchain companies, startups and with universities and researchers. From these conversations they identified that there was appetite to explore business opportunities between China and Denmark.

Ran partnered with Professor Roman Beck, IT University of Copenhagen and Head of the European Blockchain Centre to found the Blockchain Business Bridge. Along with Roman, Ran onboarded the Confederation of Denmark Industry, which is the biggest industrial organisation in Denmark with more than 11,000 companies as members. They also onboarded the Danish Chinese Business Forum who is particularly good at organising communication events between China and Denmark. 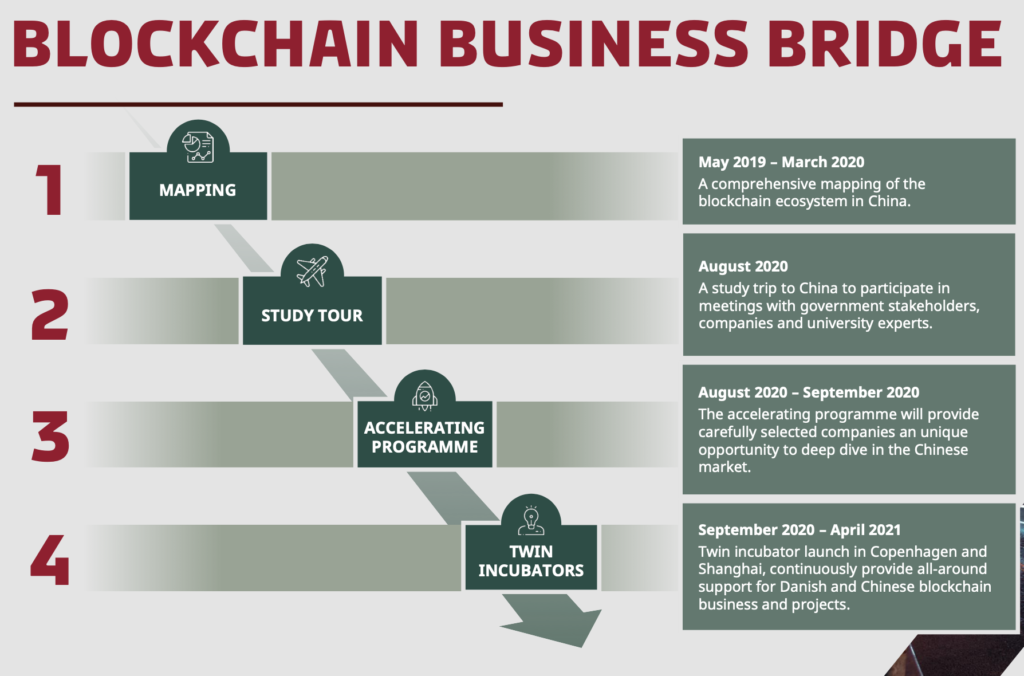 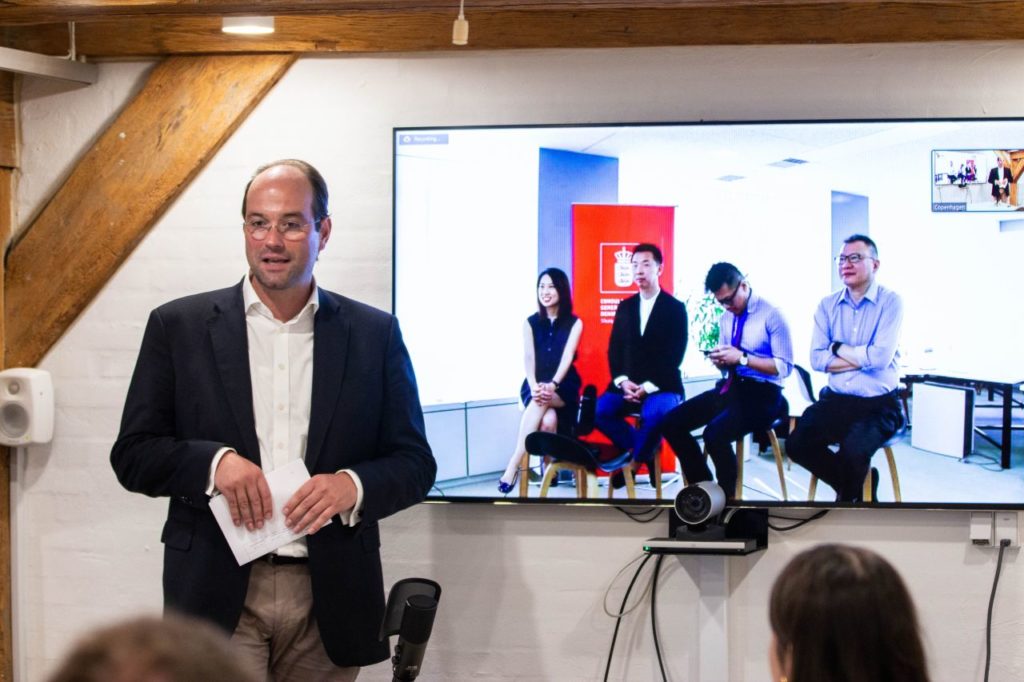 The Blockchain Business Bridge Bootcamp was a unique opportunity to discuss and refine blockchain oriented business models. Experts from China as well as Denmark coached and mentored participating teams in their approach to improve their business plan and roll-out strategy. At the end of the programme there was a grand pitch in front of investors and venture capitalist from both China and Europe.

Six Danish companies participated: Avallone, Banktech, Blockshipping, Paiblock, Rittal, Vpledger. The feedback from the programme was beyond their expectations. For example, one of the participants is in conversation for investment from a VC whilst others are establishing collaboration opportunities between researchers and industry.

One of the biggest challenges in running such an event is that in Denmark, blockchain is still a very early stage technology where the ecosystem is not mature. Finding companies to recruit for the bootcamp was a challenge. Getting Danish big corporations educated on blockchain was also a challenge but this isn’t something that these companies were prioritising as they aren’t bought into blockchain technology.

Ran shared that when she talked with Danish companies she always made it clear blockchain is not a panacea for everything. Don’t try to apply blockchain for everything you have to be very customer orientated. Listen and observe what are the true pain pints of your customer. Don’t imagine a problem and try to solve it.

Ran also recommends that whenever a European or Danish startup or company wishes to enter the Chinese market they should identify a local partner that can help them get connected to the right resources as it is very difficult for an individual company to set everything up on their own.