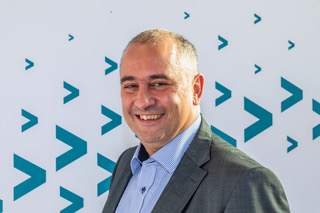 Harry Behrens – bloXmove co-founder. Harry was until recently the Head of the Daimler Mobility Blockchain Factory where they built a mobility blockchain platform. Harry describes himself as a software guy. Now, along with his co-founder Sophia Rodiger, he has performed a management buyout of the Daimler Mobility Blockchain Platform which is the core of what bloXmove will be bringing to the market. In this podcast we discuss how bloXmove will enable building an open mobility ecosystem.

Harry defines distributed ledger technology (DLT) as way for independent parties to keep a shared set of truthful facts of transactions they conduct amongst each other. It is a peer to peer system that facilitates trusted transactions between trustless parties, where they can trust the distributed ledger to reflect the reality of the business relationships between them.

From Daimler Mobility Blockchain to bloxMove

One of the many uniqueness of this startup is that of the four founders, two of them are women with the CEO being a woman named Sophia Rodiger, who also comes from the Daimler Mobility Blockchain Platform.

Non-native electric automakers, where native electric being Tesla for example, are facing serious transformations, in additions to the challenges of COVID19. Daimler for example is doing a form of demerger of all its entities where the truck unit is being separated from the passenger car unit and its financial arm is being split into two. In such times Daimler, like any other business, needs to focus on its core business. Thus, no matter how promising the mobility blockchain platform could be for Daimler or Daimler mobility it isn’t core business.

The platform was production ready and was ready to be “unleashed” as Harry describes it. However, as the platform was built for ecosystem, he believes that any big player with a very strong brand name will never be able to build an ecosystem because it won’t be able to attract the other brands to its ecosystem. For example, Daimler wouldn’t be able to attract Toyota, BMW or Tesla to join the Daimler Mobility Blockchain Platform.

Thus, the only way to do a platform game, to go into platform economics based on software can only be done via a perceived neutral entity.  A platform branded as the Daimler Mobility Blockchain Platform will never be able to become the platform for shared mobility or urban mobility.

It was thus agreed that Sophia and Harry will perform a management buyout of the Daimler Mobility Blockchain Platform via bloXmove with the help of venture capital funding from players such as Outlier Ventures.

“By granting the software license, we want to make it possible for the platform to be used for other areas of application and thus to reach its full potential. I am very pleased that our successful pilot project is now being continued and further developed at bloXmove,” says Carmen Roth-Schäfer, CTO Daimler Mobility AG.

BloXmove being this independent third party is now able to build on this mobility blockchain platform and build a mobility ecosystem to revolutionise the way urban mobility is conducted.

Changes to the mobility industry

About 5 years, Harry shares, that the automotive industry started looking into an analysis of the upcoming megatrends such as “CASE” (Connected, Autonomous, Service/Software, Electrification), development towards smart cities, environmental consciousness and avoiding congestion in the big cities.

Mobility is increasingly transforming from “I want to ride my car” to “I simply need to move within a city”. The cities of the future are increasingly constituted by many different modalities of transport: micro mobility scooter, walking, bicycle, public transport and other shared resources. This changes the paradigm of the product from a vehicle to mobility as a service where the customer needs the highest level of flexibility in mobility within a city as per their preferences and needs. This requires a clear collaboration between a number of parties where a customer can demonstrate a form of credential that is accepted seamlessly between all the parties. This is similar to a SIM card when it is being used in different countries on a roaming basis.

In this scenario a customer is only onboarded once, payment can be done in a seamless manner where in the backend all of the players can run the settlement between themselves.

To deliver on such a vision you would require a decentralised shared infrastructure. Whilst centralised platforms can develop an efficient system for the end user, Harry describes them as having the potential of being seriously dangerous and almost predatory. He gives the example of a centralised platform such as Uber that manages to take 20 to 25% of revenue from the operator. He believes that they can do that because their power is so imbalanced that the operator has no choice.

For Harry, decentralised platforms are the way that enables the participants to scale together, to have the network effect whilst keeping their customer relationships.

You have to start at identifying the key stakeholders and their incentives. You then try to find a set of incentives that all parties share in common. Harry makes references to the successes of co-operatives in aligning incentives between all of their participants. When incentives are well aligned between participants and competitors they can continue to compete between each other whilst still collaborate on many levels. The collaboration level does not interfere with their core incentives.

Most standards have a better chance of being successful if they are introduced by a neutral player, government or policy maker who help to define an open standard and an open API standard. For example, in the Netherlands there is an interesting initiative being done by the Dutch Blockchain coalition and the Ministry of Infrastructure which is precisely in going in that direction of defining open standards and open API standards.

The platform will be structured from the operational side as a cooperative. Operators are both customers and co-owners of the platform. As customers they pay transaction fees on revenue they make and as co-owners they get to keep a portion of that transaction fee. On a basic level this is the incentive design that is being used to structuring the governance