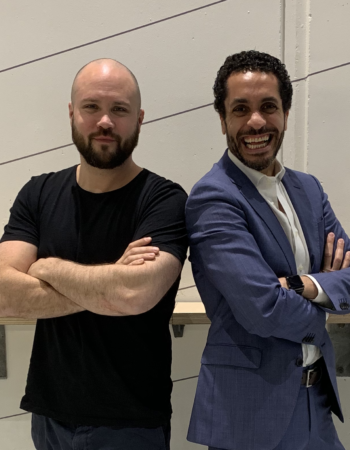 Jamie Burke is the founder & CEO of Outlier Ventures. He also is a pioneer of the “Convergence Thesis”, where blockchain is foundational to Web 3.0 a more decentralised and automated future.

In this podcast we discuss how we are starting to see the emergence of a “convergence ecosystem” that involves blockchain, AI, IOT, big data and robotics that will help to build new markets that are open-source, distributed, decentralised, automated and tokenised.

Jamie has a background in digital innovation and change management within large corporations. Prior to founding Outlier Ventures, Europe’s first blockchain venture platform he was an angel investor.

Founded in 2014, Outlier Ventures is a venture platform focused on building the infrastructure for the next phase of the Internet. Their investment philosophy is based around the idea of the Convergence Ecosystem. They view blockchains and other decentralised tools like tokens as a new data layer enabling other technologies like AI and IoT to combine and converge.

Outlier Ventures are the authors of – The Convergence Ecosystem 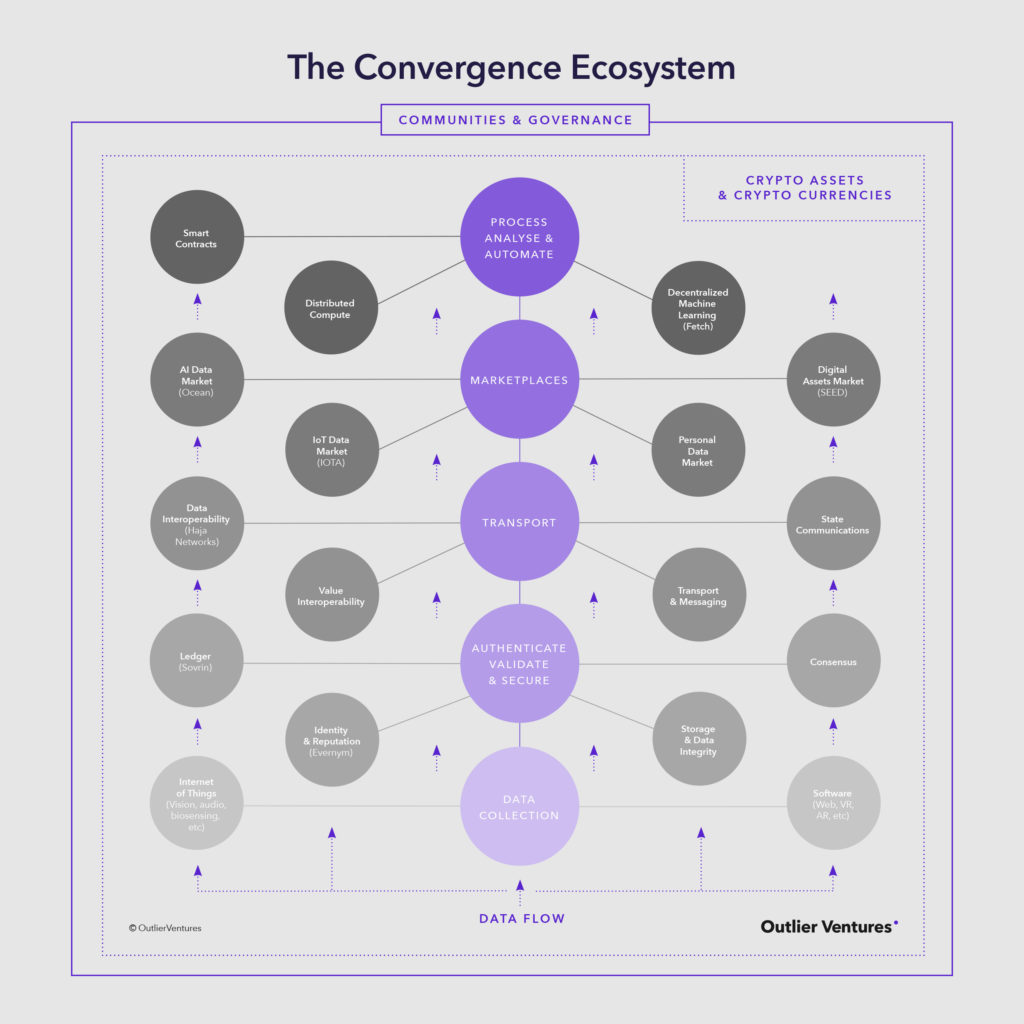 Blockchain is a catchall word which broadly represents distributed ledger technology (DLT). A blockchain is a very specific form of DLT. Jamie prefers defining what is DLT instead of blockchain as he finds the broader application of DLT in all of it different configurations more interesting. DLT can be broken down into three components:

What Jamie expects is that both at the ledger and at the smart contract layer, is an increase level of intelligence, which is why they’ve invested in a start-up called Fetch.ai.

What is the convergence ecosystem?

A little over 3 years ago, Outlier Ventures had spoken to over 1,500 blockchain start-ups, most of which would fail. Many of the challenges these start-ups faced was the lack of blockchain infrastructure (Eg. on Ethereum or on Bitcoin) thus making their use cases not quite possible.

It increasingly became apparent that DLT shouldn’t be looked at on its own, but how it can be used to look at IoT (Internet of Things) or AI (Artificial Intelligence) problems, preliminary predicated around data.

It was at this moment that the Outlier Ventures team decided to look at DLT’s ability to not only solve IoT problems, especially industrial IoT, and AI problems but actually all of these things combined and accelerated one another. For example the minute you solve for one problem such as securing an IoT and supply chain of IoT devices you can have provenance of devices and data all the way up to incentivizing the ability to unlock data marketplaces to train AI algorithms. Looking at these problems from a convergence perspective is the only way to make sense of it all: 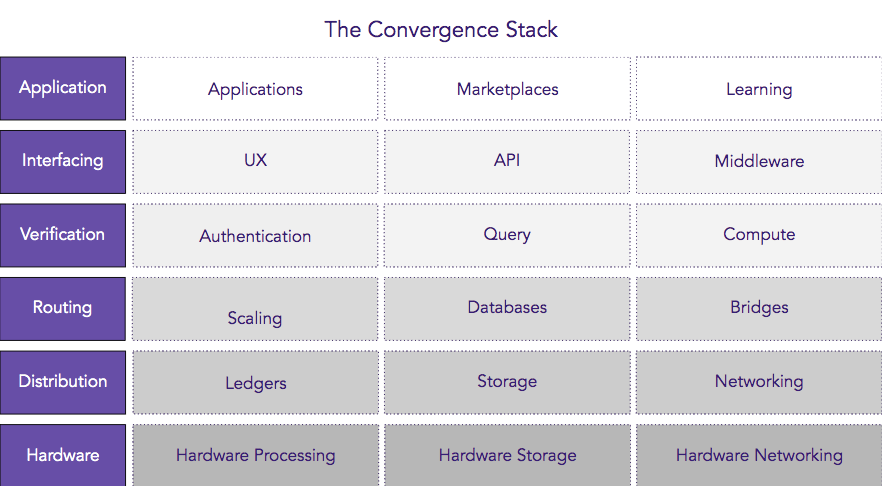 Insureblocks shares a similar view to Jamie’s regarding the convergence ecosystem. We look at it from a technology standpoint in terms of the new stack: 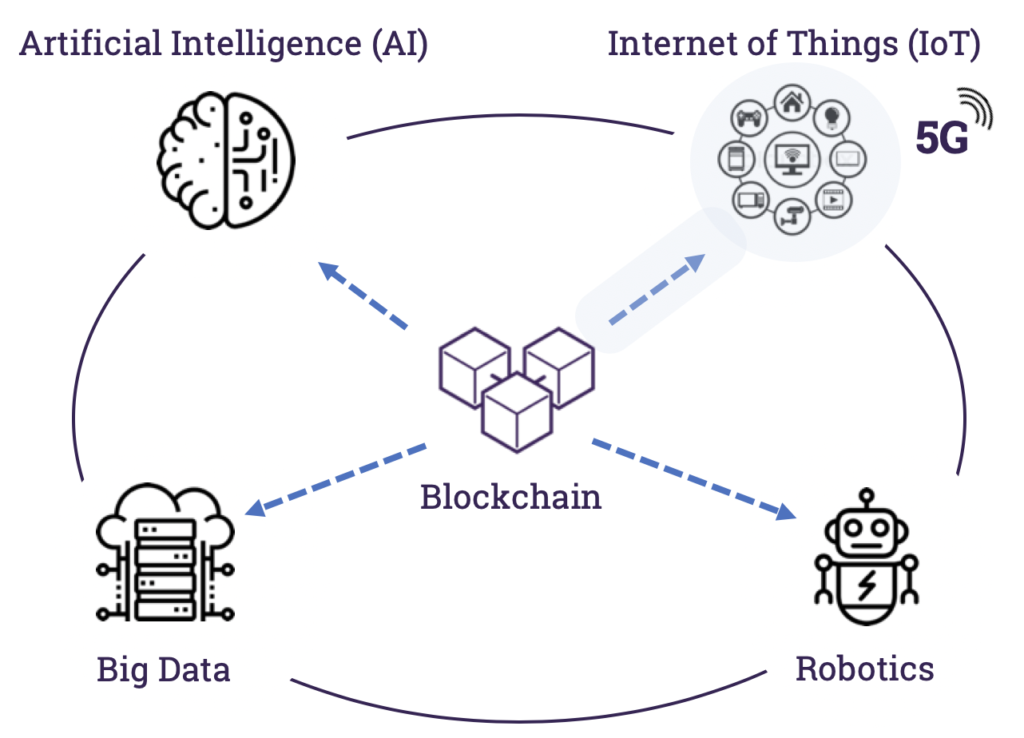 There’s also an industrial standpoint, the Web 3.0 for the ecosystem of ecosystem:

The current web paradigm is predicated around the platform model, one built around mediated marketplaces, and the cloud. This has brought numerous conveniences but also huge concentration of data, wealth and power to a handful of platform monopolies. Google, Facebook and even Amazon have become competitors to a large number of industries around the world.

The emergence of the new stack that is built upon being decentralised and distributed is one that will naturally unbundle those monopolistic platforms.

Data is at the centre of this paradigm shift. Data is the commodity. It’s collection, curation, transportation and ultimate conversion in a digital asset is key. Digital asset not just in terms of representation of value but as programmable assets which can be trade, measured and quantified according to a set of incentives and disincentives. They can be fed into smart contracts and machine learning algorithms to enable autonomous systems. This leads to coordination mechanisms in distributed systems.

In a Web 3.0 that is distributed and decentralised, that is centred around the person and the sovereignty of their data, you can trust devolving an increasing amount of economic work to digital agents that serve the individual rather than the platform.

This bottom up paradigm will break up those monopolistic platforms which is something both governments and regulators have been taking an active interest in from an up-bottom approach.

Clashing views regarding the future of the web

Sir Tim Berners-Lee was part of a very small group of scientists, researchers from a few academic institutions who made some deliberate design choices when designing the internet. These choices were motivated by a certain political philosophical belief as reflected by the Declaration of Independence of Cyberspace for example, they said they wanted to do away with many of the instruments of the state. They wanted to do away with identify, property, rule of law and other concepts that society was based upon to create an environment where that wasn’t required.

Whilst that was true when they all knew and trust each other but it didn’t scale to a planetary level. This created the web today, an environment without identity, which led to the platform monopolies acting as trust brokers because people can’t trust one another on the internet.

The platform monopolies have effectively become non-state actors. Facebook is one of the biggest countries on the planet without the degree of accountability that any politician or government would have. Data centres are like the new offshore bank account for these platform monopolies. It allows them, to do certain economic activity which they couldn’t do onshore.

According to Jamie there exists three alternative vision to the internet:

This European third way is one which is where we are most likely to see this decentralised web take root both in terms of the bottom up innovation and the innovation of crypto assets.

According to Gartner there will be 20 billion IOT devices online by 2020. All these connected devices will produce a lot of data. The cost of processing and storing large amounts of data, which largely becomes as data rapidly loses its value if it isn’t rapidly consumed, is ever increasing. Yet in spite of that it is still being stored and secured at great costs. “In 2015, data centres consumed about 3 per cent of the global electricity supply and accounting for about 2 per cent of total greenhouse gas emissions. That gives it the same carbon footprint as the airline industry.” Source: The Independent.

Because the new data is central to Outlier Ventures thesis, the Convergence Thesis, Outlier Ventures invests in protocols and markets, marketplaces that solve this problem such as Ocean Protocol. It’s an open source protocol that is a non-profit foundation based in Berlin,  that has designed a token economy which enables a data marketplace.

Data is often referred to as the new oil, they refer to it as a commodity. Yet it can’t be traded like a commodity. It’s very difficult to quantify the value of data generally and then specific to a certain context. Because market forces just don’t apply. There’s no incentive.

At a World Bank level,UK national level and at a local government level there are numerous open data initiatives with an obligation to create a data feed or an API. But it’s just raw data, it’s almost unusable and comes in lots of different formats. Ocean protocol has designed a marketplace which looks to incentivize all the key participants in a data economy that can enable for looking at data provenance, data curation, data availability. This allows for participants in that data ecosystem to stake money on the value of data.

The real value of the data comes when it is being fed into an algorithm, into an AI that can transform the data into insights or actionable outcomes to give to machines or some form of automated systems. Ideally you want these machines to be able to act upon insights as quickly as possible from as fresh a dataset as possible and then potentially find correlations between data sets that just aren’t possible top down.

If you speak to most enterprises in any industry, they don’t have a blockchain problem nor a decentralisation problem. They almost definitely have a data problem and the data problem is they don’t know what to do with their data. They know it has some value to somebody, but they have no idea how to extract it, enrich it, acquire insights from it or automate it into actionable outcomes for their own purposes or the purposes of others.

Have a decentralised data marketplace and incentives for a data economy to form around data in a way that is usable for enterprises can address this problem.  This opens up interesting consortia’s around particular sets of data or a particular automation where barriers of trust or friction points can be removed.

Corporatism in a decentralised web

What excited Jamie the most about the decentralised web in the context of AI and how the value realised by an AI can be owned is the idea of an AI co-operative. The closest business model or organisational structure to the decentralised web is the co-operative. Groups of people at any level can contribute primarily by producing data to an AI. The question that arises is who owns the AI or the value generated by the AI. Giving AI personhood in a similar way to a corporation is fraught with risks, as the driving factor for those AIs would be shareholder value. These AIs run the risk of being offshores and thus won’t pay any tax on the value they accrued. The opportunity is to create an infrastructure whereby at a click of a button a co-operative can be created that can own their data and if anybody wants to use that data to train an AI has to somehow negotiate with that co-operative or the co-operative itself is an AI.

How can incumbents, like insurance, prepare themselves for this convergence ecosystem?

Jamie answers this question by where in his opinion lays the most opportunity. He sees the most opportunity in the machine to machine economy. How can insurance insure machines, whether that’s in autonomous systems (eg. dark factories or supply chains where there aren’t so many people). There needs to be a flow of data, a flow of value and therefore flow of risk management. Thinking about the legalities of smart contracts between machines in the context of insurance can be very powerful. Nexus Mutual for example offers smart contract cover.

The second opportunity for insurers is how can they contribute data as an asset to a wider ecosystem and not do so in a way where they think that in of itself has proprietary value. Instead to look at it from the value it unlocks when combined with other data sets and the new business models that could be innovative on top of that.

Thank you, Jamie, for sharing your insights on the convergence ecosystem. If you liked this episode, please do review it on iTunes. If you have any comments or suggestions on how we could improve, please don’t hesitate to add a comment below. If you’d like to ask Antony a question, feel free to add a comment below and we’ll get him over to our site to answer your questions.