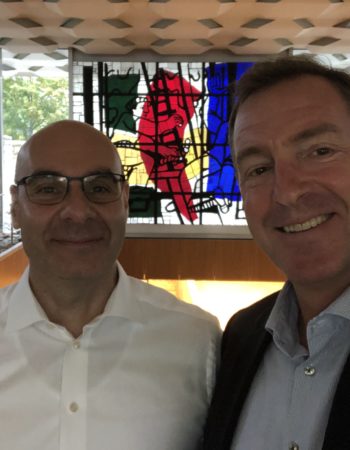 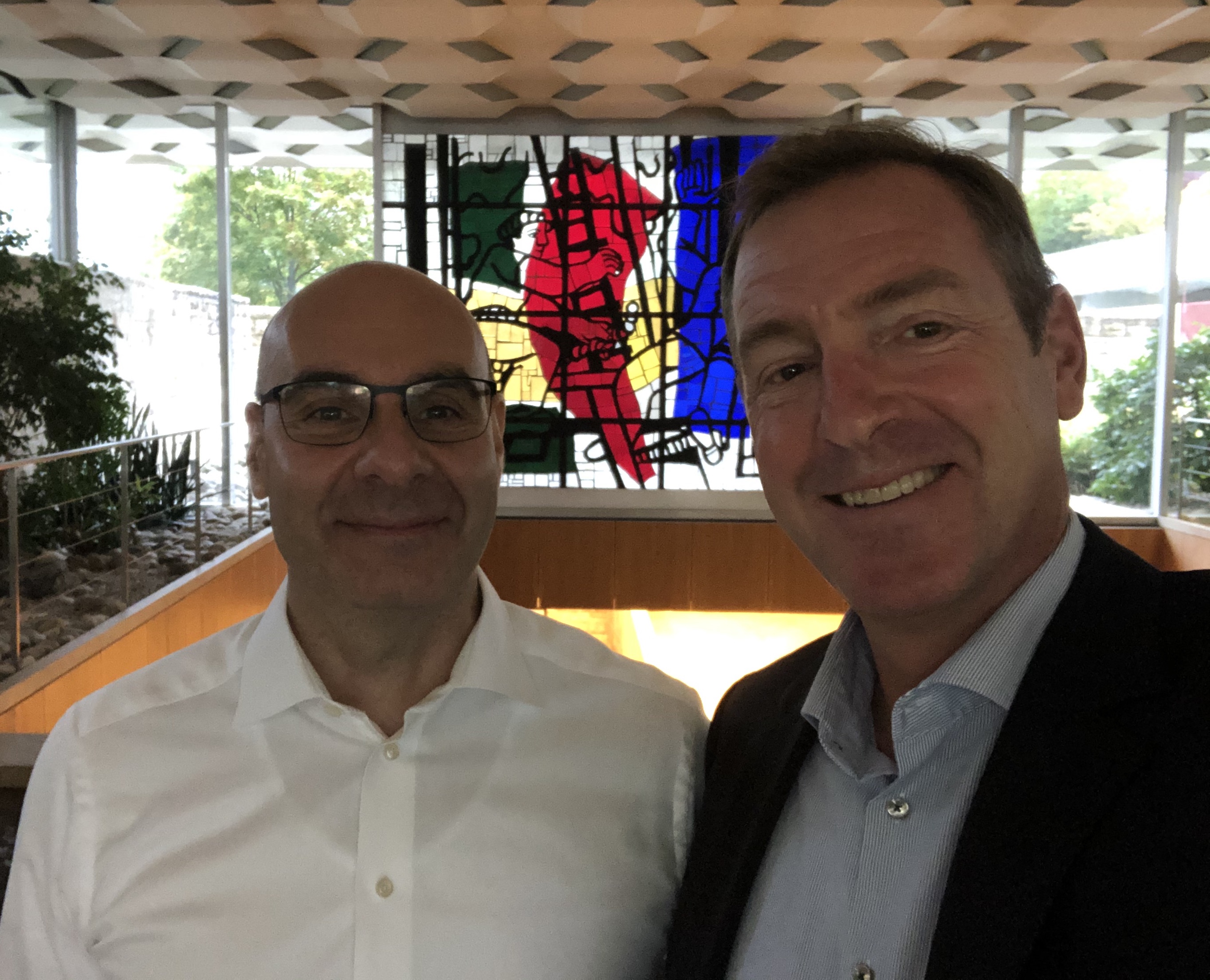 In this exciting episode we had the great pleasure of interviewing Dan Fritz and Marco Cuomo to hear about the exciting blockchain work they are doing at the pharmaceutical giant, Novartis. In this podcast you will hear about the wealth of experience they have developed by building POCs using Hyperledger, Ethereum and Corda.

Dan Fritz role is domain architect for supply chain. His department look at technologies that support supply chain business capabilities. They also look at emerging technologies and how they could be used to leverage and address the business needs.

Novartis is a global pharmaceutical company with about 100,000 employees in over 100 countries. It has a portfolio of prescription medicines, a generic division, and is increasingly focused on biotech including cellular and gene therapies.

Marco Cuomo recognises that defining “what is blockchain?” is a difficult question to answer. In Novartis they have developed a “blockchain elevator pitch” to describe what is blockchain internally to their business and to their internal customers. Blockchain is a shared means centrally controlled, distributed ledger. Every partner in that blockchain network has a copy of that ledger and it enables immutable recording of transactions. These transactions track assets without the need for intermediaries.

Dan adds that blockchain is a socio technical construct which is designed to be a win-win for all participants engaged within it. This requires a different mindset where all participants are growing the pie together instead of just slicing it up.

Beginning of Novartis journey into blockchain in 2016

The immutability aspect of blockchain is what attracted Dan and Marco to blockchain. Immutability is a key attribute that is desired in the pharmaceutical industry. This is an industry that is highly regulated, it operates under GxP, or good manufacturing, good distribution, good clinical practices, where the traceability of all of the processes and the accountability of all of the processes have to be proven and documented. A shared immutable distributed ledger seemed like the perfect tool in comparison to creating binders of paper that go into an archive for 10 years.

From a supply chain perspective, it was the promise that blockchain could provide more efficient transactions, reducing the friction between data silos and organisational silos through a shared ledger.

Additionally blockchain could provide the patient control of their own data instead of it sitting with a range of intermediaries. There is the opportunity for creating patient data marketplaces. 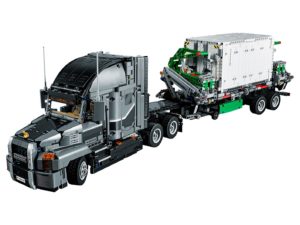 In 2016, Marco purchased a set of LEGO Mindstorm Truck to create a supply chain scenario where a serialised product is delivered from a packaging line onto a truck which transports it across the supply chain from a pharmaceutical manufacturer, to a distributor, to a pharmacy and ultimately to the patient.

At every step of the way the serial number is tracked against the serial number of the previous block to ensure that the medicine hasn’t been swapped or that it is a potential counterfeit. IoT was added to this blockchain with a set of temperature monitors to simulate a temperature excursion where the medicine is outside its standard transportation conditions. Every participant on the supply chain is informed if there is a potential quality issue.

If a company controls their ecosystem, all of of its suppliers and distributors then maybe a central database approach will work. However, in the case of the pharmaceutical industry, there are hundreds, if not thousands, of different players distributed across the globe. Thus, there is no way to find a centralised system that would work for everybody. Dan believes that blockchain if set up in a truly win-win scenario which can provide benefits for all the different players to participate whilst using the same standards and protocols, is a winning case. 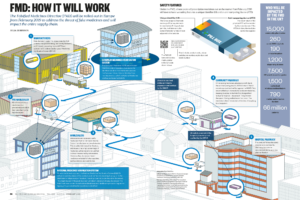 Single source of truth. 60% of the pharmaceutical market is governed by serialisation laws, such as the Falsified Medicines Directive for Europe or the Drug Supply Chain Security Act in the United States.

This is where each pack has its own serial number which can be authenticated at any point on the supply chain. At the moment though the pharmaceutical industry isn’t able to cross check or correlate the data in the supply chain. For example, if different types of data such as temperature data, order data, inventory data, ship from/to data could be cross checked this would greatly increase the integrity of the supply chain and provide end to end visibility on the product at every step of the way. This unfortunately isn’t the case today.

The other point is the illegal supply chain – the product that never comes through a normal pharmacy but sold in a street, in a developing country. The only protection that you would have there is empowering a patient to do their own check of authenticity. Dan is keen to evaluate the feasibility of leveraging blockchain to empower these patients to do such checks in the future. 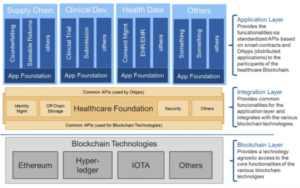 Last year Novartis proposed a blockchain enabled health care programme to the IMI which is the Innovative Medicine Initiative – Europe’s partnership for health. They chose to work with IMI as they had quickly realised that blockchain is a team sport and that they needed an ecosystem with players from their industry. The project they submitted to the IMI was called the Blockchain Enabled Healthcare with the aim to build the foundation for a blockchain in the healthcare industry that brings all the players from the pharmaceutical industry to the patients, hospitals and regulators.

Six to seven companies immediately signed up to the initiative and now there are 11 companies in the consortium with more set to join.

The aim of Blockchain Enabled Healthcare was to prove that blockchain is a solid foundation infrastructure platform. To prove it they focused on three use cases:

A governance body was built around the platform to make clear how the different partners can work and trust each other. Existing standards are being leveraged such as GS One for the supply chain.

The project is due to kick off in early 2020 and will run for three years.

Criteria for developing a blockchain solution

Dan and Marco also realised that if a project only requires an incremental improvement to an existing process in order to reduce a bit of cost or add a little bit more of quality then this probably isn’t best for blockchain. Blockchain is for totally reengineering a process that is involving multiple stakeholders which should be a step change in the way things are done. The prerequisite for that is, is there a consortium, a group of like minded partners that are willing to work together. Do they have standards defined or are there standards available that can be leveraged? These points are the starting ones when filtering potential blockchain use cases.

Awareness and education is the biggest challenge for blockchain. This isn’t just across the ecosystem but internally within Novartis’ own employees. Getting everyone aware of what’s possible cold accelerate the adoption of blockchain. With increased awareness and education Novarits employees are approaching Dan and Marco with great ideas that they couldn’t have thought off. It’s really a bottom up approach where the business identify their pain points and come up with ideas on how blockchain can help them. It is also coming from the top as they are very lucky to have a CEO whose mantra is to go big on data and digital and focusing on innovation. They’ve got a mandate to pursue blockchain, to run proof of concepts to tests out those business ideas.

When launching their POCs Dan and Marco were always keen not to always use the same technology. In 2017 there first POC was with Hyperledger, which they found a bit complicated. The second POC, the LEGO Mindstorm Truck, was with Ethereum which was a lot easier. It had a bigger community, lots of tools available to download and big cloud providers.

Right now they’re evaluating Corda on a POC which they understand is very developer friendly. In between those POCs they’ve evaluated Hyperledger Indy and other platforms. For now they don’t believe they have seen the winner right now and are happy to continue evaluating new technologies.

The long-term strategy is about the whole IMI accelerating blockchain adoption. To have a reference implementation in the three areas of supply chain, clinical trials and health data. That they can be built upon in a sustainable manner by the participants in the project and other industry members to scale it as broadly as possible.

From the very beginning Dan and Marco thought for the need for inter blockchain connections to see how their blockchain could interact with other blockchain networks. Interoperability is one facet of it but the sharing of best practice is also important. For example Dan and Marco met up a few times with the B3i team to learn from their experience in developing consortium. They also have regular talks with other industries from the fashion to the financial industry to sharing best practice.

They ran a POC where they tested medical devices that collected data from patients. The data was collected in a data bucket with some AI sitting on top of it. Data integrity is required from the beginning. Blockchain assures data provenance. In a situation where you may have hundreds of medical devices collecting data you need to be able to conclusively identify the data provenance. Did it come from a real patient or from some generic data?

Additionally, Dan and Marco believe that self sovereign IDs such as the ones by Sovrin has the potential to be a killer app. Dan goes even further and states that when they were evaluating different use cases they realised that in some use cases, just identity itself is a use case. Having a blockchain anchored guarantee of identity that can associate digitally verifiable credentials solves many things in the pharmaceutical industry. This is something they see applicable not only for patients, employees, but organisations products, devices and a lot more. This is something Dan and Marco believes will be a game changer when it takes off.