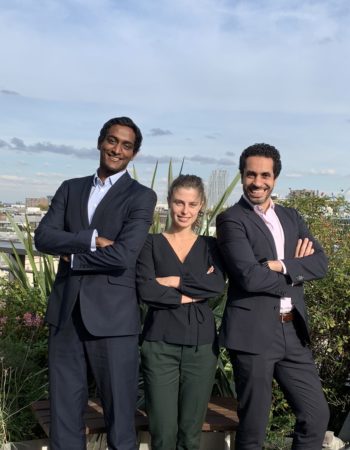 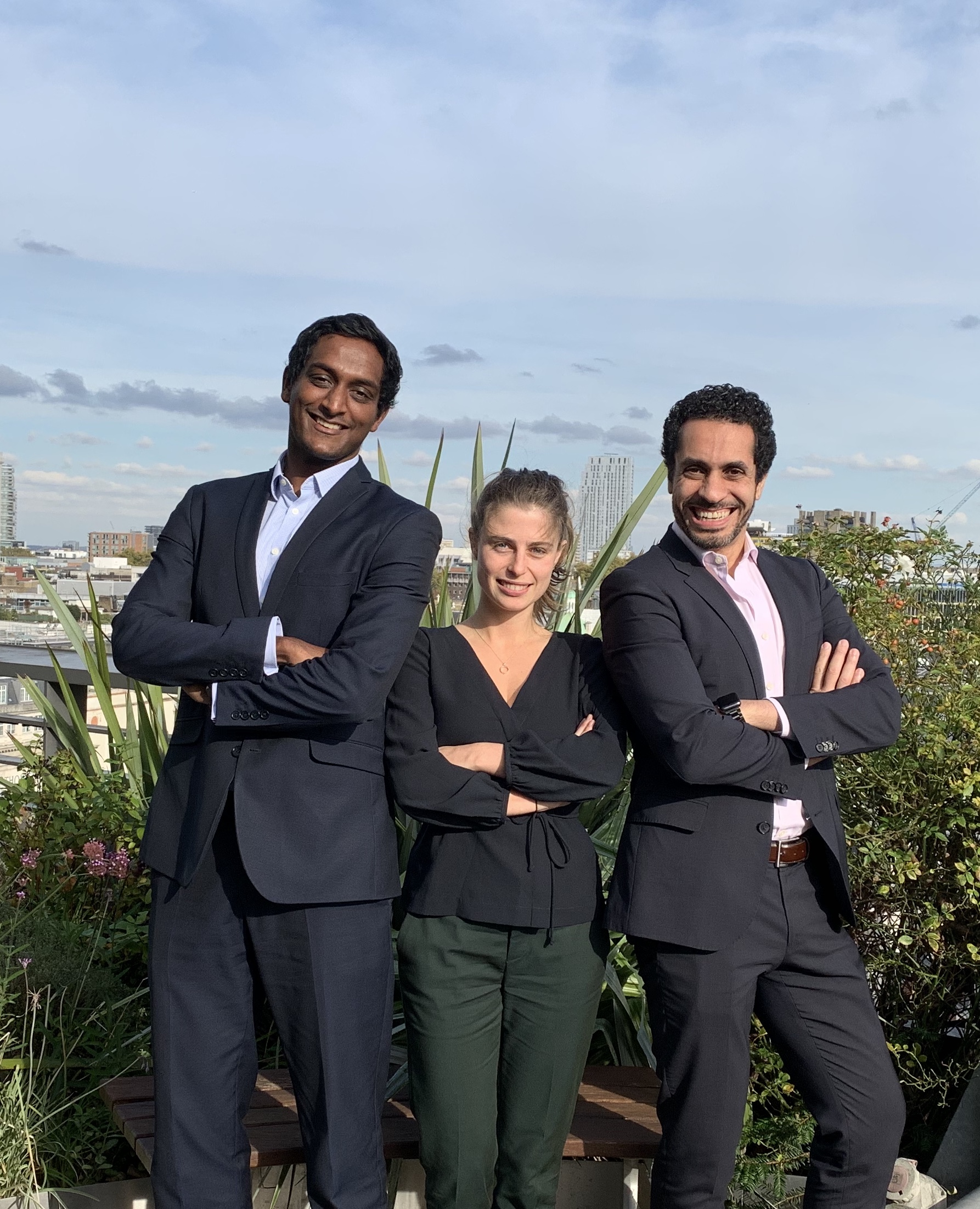 The GovChain Project is a wonderful project that aims to paint an accurate picture of the state of implementation and regulatory treatment of blockchain by the public sector around the world. Using a traffic light rating system, the report provides a rough guide to the varying levels of blockchain adoption across the targeted jurisdictions, identifying emerging patterns and trends.

We had the pleasure of interviewing two of the co-founders of this project:

Blockchain isn’t particularly a new technology. It’s actually a combination of technologies we’ve had around for decades. It’s the combination of these technologies that is novel. Blockchain is a shared database, distributed among several devices, also known as nodes and uses cryptography to ensure immutability and accountability. Immutability is defined as once a piece of information is stored in the blockchain, it’s impossible or very difficult to change that piece of information. Accountability is defined as visibility across the whole network, so people can see what transactions have happened, and where the information is stored.

What is the GovChain project? 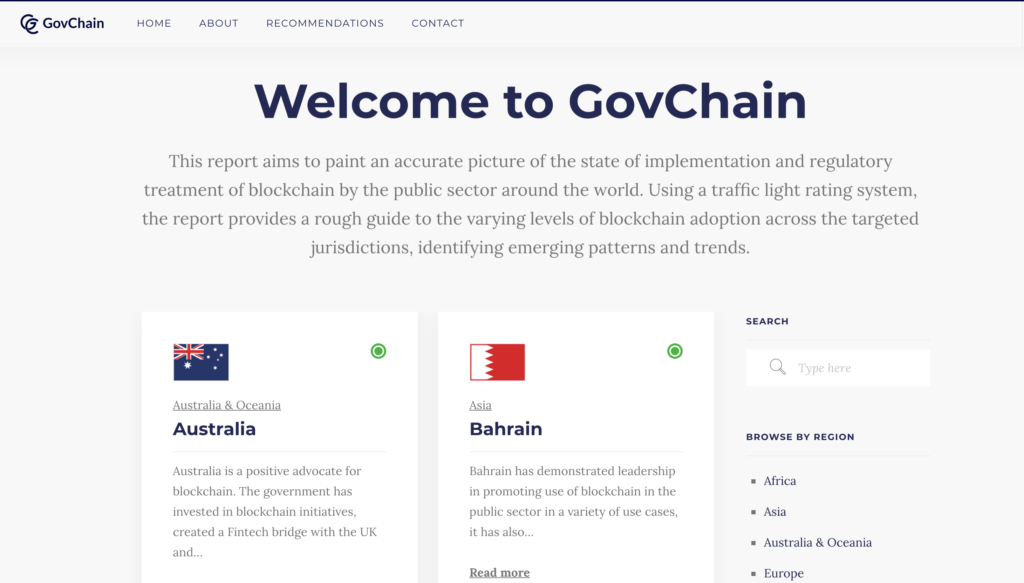 GovChain is a publication that aims to paint an accurate picture of the state of implementation and regulatory treatment of blockchain technology by the public sector around the world.

GovChain team mapped out the regulatory and policy environment across over 20 jurisdictions to assess their degree of friendliness towards blockchain technology. They spoke directly to policymakers and entrepreneurs who have attempted to implement blockchain within their jurisdiction. They sought to find out what the key drivers were that allowed them to make this change, be at funding, political leadership, policy environment, cultural factors or something else to then draw up recommendations of best practices that other countries can learn from.

In addition to Lavan and Lucie, Helen Disney is the other co-founder of this project. It was born out of a conversation at a conference where the three co-founders realised the lack of information that was available regarding public sector implementation of blockchain. Victor Chatenay was brought into the team to conduct interviews and analysis across all of the jurisdictions.

The benefits of a technology like blockchain could be more impactful in the public sector space. But what you do also need is the private sector to come in and innovate within the public sector. The public sector may have the intention to be innovative and use new technologies, but they don’t always have the tools necessary and know how or there’s too much bureaucracy in place.

Private sector is a lot faster and a lot leaner. They have the capacity to rapidly explore and experiment with new technology solutions and bring those learnings to bear to the public sector. This creates opportunities for a symbiotic relationship between the two.

It’s important for both the public and private sector to have good communications for:

It is so important, whatever it may be financial regulators or health regulators in any country are open to innovation, but you do have to understand their incentives as well. They need to protect the consumers and they need to protect the people in their jurisdiction. Regulators are very keen to learn more about the technology to enable them to form better more sustainable regulations as a result.

Ranking of countries state of implementation and regulatory treatment of blockchain

The GovChain team implement a traffic light system for ranking the countries’ state of implementation and regulatory treatment of blockchain:

This was established through research and through conversations with the policymakers in those countries. Each country can be clicked through to investigate what are they doing and what are the learnings they have for others to build on.

Smaller jurisdictions, like Estonia, Gibraltra, Malta and Bermuda really saw blockchain as an opportunity to put themselves on the global stage and to be innovative. They were some of the first ones to put the necessary rules in place for the development of blockchain use cases. This did attract a lot of interesting projects to move to those jurisdictions.

Some of the key findings that came out of the report was the importance of creating a political and economic environment that is conducive to harnessing blockchain technology. 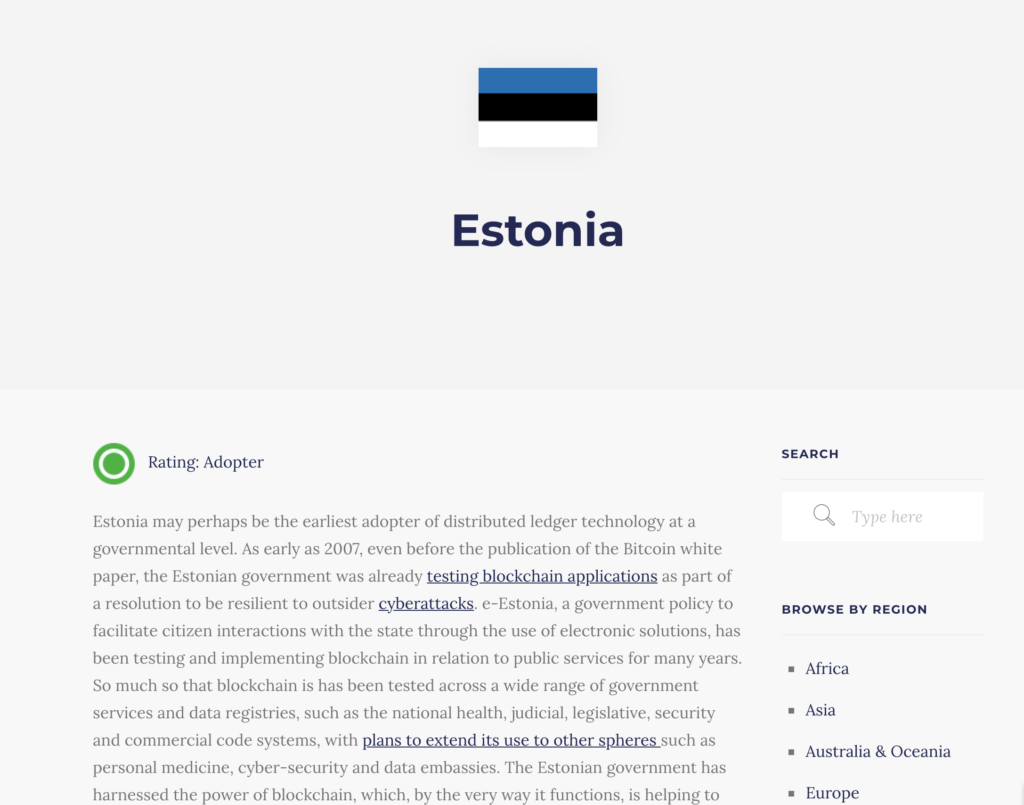 For example, Estonia is a great example of a country really assessing the economic rationale behind using the technology before implementing it. Gibraltar is another fantastic example of a jurisdiction in which they created certainty by creating a regulatory framework which invited companies to come and operate in Gibraltar.

Alternatively, if you look at countries who weren’t clear on regulations this can create problems. For example, in 2017, the SEC in America came down very strictly on ICOs (initial coin offering) very early on by stating that not abiding with the securities law would be a violation. Other countries were not so certain at the get go resulting in consumers being taken advantage of and losing a lot of money.

For Lucie, it mostly comes down to not using the technology for the sake of using the technology. Many of the individuals in different countries that they have interviewed take a very risk-based approach to blockchain. They understand that if it’s not worth the return on investment, then they don’t need to use this. Blockchain is a very good solution in very limited circumstances. And those circumstances are mostly that if you’ve got multiple parties who are acting on the same piece of information, they all need to be able to edit it and access it and they can’t necessarily trust another third party to do that. That’s when a blockchain is a really good use case.

One of the key findings of the report is the importance of international cross border cooperation. Ultimately, blockchain technology doesn’t see borders. Therefore, it is important to have international rules and standards put in place. For example, when conducting interviews with the authorities in Bahrain, one of the key things they mentioned is to ensure that blockchain doesn’t operate in just one country but allows businesses to easily transport across jurisdictions. They’re trying to standardise their efforts in the region and create standards through the Gulf Cooperation Council.

In the UK the FCA (Financial Conduct Authority) is actively participating in the Global Financial Innovation Network (GFIN). GFIN is an international group of financial regulators and related organisations, including the FCA that seeks to provide a more efficient way for innovative firms to interact with regulators, helping them navigate between countries as they look to scale new ideas.

Importance of a regulatory sandbox

The FCA in the UK has developed a sandbox which has attracted numerous blockchain cohorts such as Etherisc. The FCA was the first regulator in the world to create such a sandbox environment. Lucie was in China recently where the regulators are starting to warm up to the idea of a sandbox and are in discussion with the FCA to leverage their learnings. The initial fear was that sandboxes were perceived as an opportunity for people to do anything they want, which of course isn’t true as they have to operate within a regulated environment.

GFIN will enable cross country collaboration on a regulatory sandbox front which will help to speed up innovation and launch blockchain projects off the ground.

Opportunities for emerging countries to leapfrog developed countries with blockchain

Lavan & Lucie where asked if similarly, to the African continent embracing mobile phones instead of land lines, is there an opportunity for emerging countries to leapfrog developed ones with blockchain technology? Lavan makes the point that it is often difficult for larger economies to change due to deep rooted infrastructure in place. Whilst developing jurisdictions have the opportunity to leapfrog those larger economies.

Estonia for example made a conscious decision, post-Soviet Union, to focus on a digital agenda. Estonia now has fantastic internet connectivity, very high digital literacy and have in effect leapfrogged a number of jurisdictions across the EU because of that decision they made.

Traditionally policy is driven out of government departments. What’s been really interesting with regards to blockchain technology and other emerging technologies is that we’re increasingly seeing regulators such as the FCA developing policy in some ways. Traditionally the FCA is there to regulate and ensure that the law is apply by firms. What the GovChain project is seeing through initiatives like sandboxes are regulators taking a closer look at the activity that’s taking place within them. They are seeing the suitability of existing legislation and regulation and thinking how should these be adopted for the markets. As Lavan states “we’re seeing a real development of also the regulatory and legislative process in jurisdictions too.”

What’s next for GovChain Project?

The GovChain team want to hear from more people who have implemented projects within the public sector, and to add to this, get more jurisdictions and get more use cases.

They think that the more people and countries they can showcase with this work, the better it is for the advancement of the technology overall. You can get in touch with the team on https://govchain.world/contact/