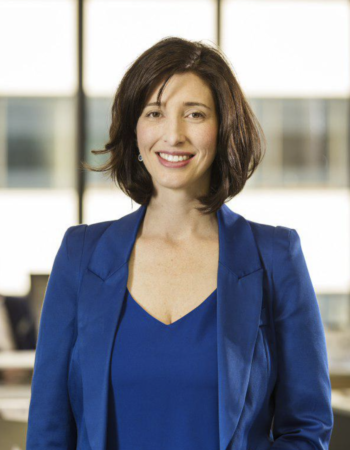 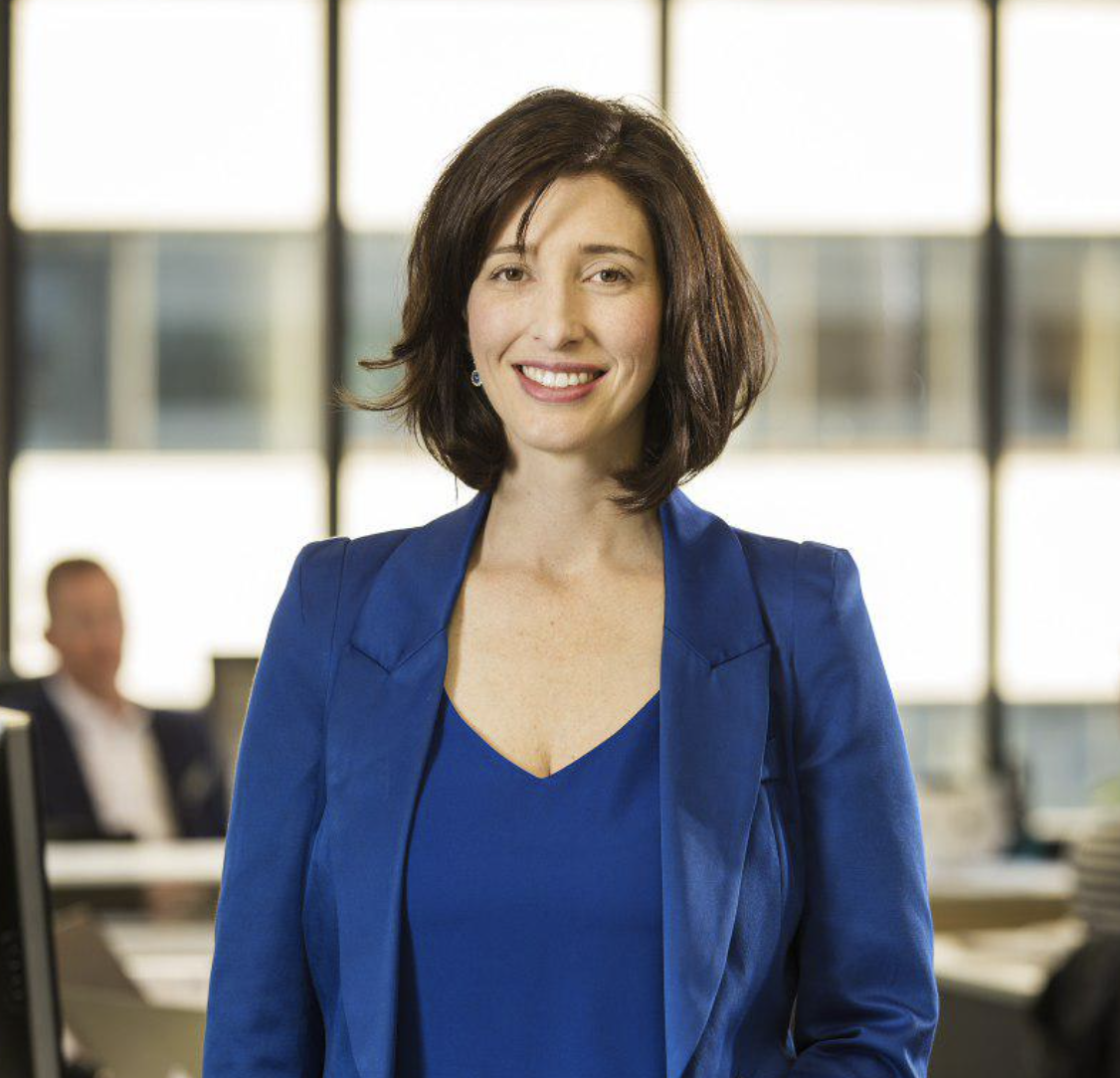 Dr. Jemma Green is the co-founder and chairman of Power Ledger. Power Ledger is a four year old technology company, with 20 power projects in over nine countries, that facilitate two things – the trading of electricity and the trading of environmental commodities using blockchain technology. In this podcast we discuss with Jemma how their platform is revolutionising the power industry and how it is being used to democratise power.

Blockchain is a like a database that can be used in many different ways. It is a common record keeping system which creates more efficiencies in the transaction process between counterparties who in the past would have had their own record keeping system. Using a blockchain enables an entry in a ledger to contain both the payment and the physical statement of a digital asset. This reduces the settlement risk or the need to reconcile and settle payments which can be very costly for the transacting parties.

With smart contracts, which sit on the blockchain, you can also perform complex commerce transactions.

For the last century or so electricity markets have remained relatively unchanged. It is characterised by large power stations, typically, coal and gas fired power, bringing electricity to people’s homes brought by transmission and distribution networks, the grid.

In the past 15 years, a new paradigm has begun to emerge as citizens and business have installed rooftop solar panels on their homes and office buildings. More recently, battery storage is being installed inside homes and businesses, as well as large scale solar and wind farms.

Technology can help facilitate the dispatch of electricity via virtual power plants to stabilise the grid which historically has suffered from volatile prices creating significant problems in the market. Surplus rooftop solar power can be stored in batteries, and that market mechanism, facilitated by Power Ledger’s technology, can help the grid deliver low cost, clean and resilient power.

These power technologies, along with the connectivity of blockchain to bring communities together, serves as a kind of citizen utility which provides a certain level of empowerment that has the potential to drive the next wave of innovation to democratise power.

There are numerous drivers towards the democratisation of power. For some it is about getting a better price for electricity whilst for others it is their concern regarding air quality and the potential to electrify transportation in their city.

Jemma believes that overall people are very engaged in the topic of electricity and becoming much more sophisticated in what they understand of the markets and what they expect of them.

Power Ledger is a technology company that uses blockchain to facilitate trading of electricity and environmental commodities. Their vision is leading the global democratisation of energy movement. To give people access to energy and to participate directly in energy markets and improve their lives and the lives of others. Power Ledger would like to be recognised as a major contributor to transforming energy markets and sustainability globally and positively impacting the lives of 1 billion people. That’s Power Ledger’s big ambition that makes the, want to get out of bed every morning and do what they do.

Blockchain enables buyers and sellers to transact with each other directly without the need for an intermediary. In the case of electricity, households with rooftop solar panels could sell its surplus electricity to its neighbours in much the same way as Uber and AirBnb allow people to monetize their cars and spare rooms.

Power Ledger works with electricity retailers in providing them with its trading platform to facilitate the retailer’s customers to trade electricity between themselves. Blockchain provides all parties with the source of truth to underpin the buying and selling of electricity and the payment of it.

For example, two retailers on the blockchain can trade with each others customers. Customers with stored electricity in batteries can sell it to their own retailer or to other retailers in the network.

Blockchain technology enables the tracing and verification of used energy sources to audit it in terms of environmental commodity trading like renewable energy and certificate trading. Additionally, blockchain can set all the trades both physically and financially in one block thus reducing counterparty settlement risk and removing the need for brokers which can drive cost efficiencies.

A virtual power plan is where businesses or households install a battery to store their surplus electricity from solar energy and wish to dispatch that electricity from the battery into the market at times of peak demand.

They might also provide what is called ancillary services to the market such as providing frequency and other control services. They might sell into the spot market to add more supply at peak times and provide grid support services to grid operators.

Essentially a customer with a battery can sign up to one of Power Ledger’s partner retailers and use the platform to access the batter for that purpose. Collectively all of the batteries in the network are what’s called a virtual power plant. Together they can add up to the same size as a normal power plant. 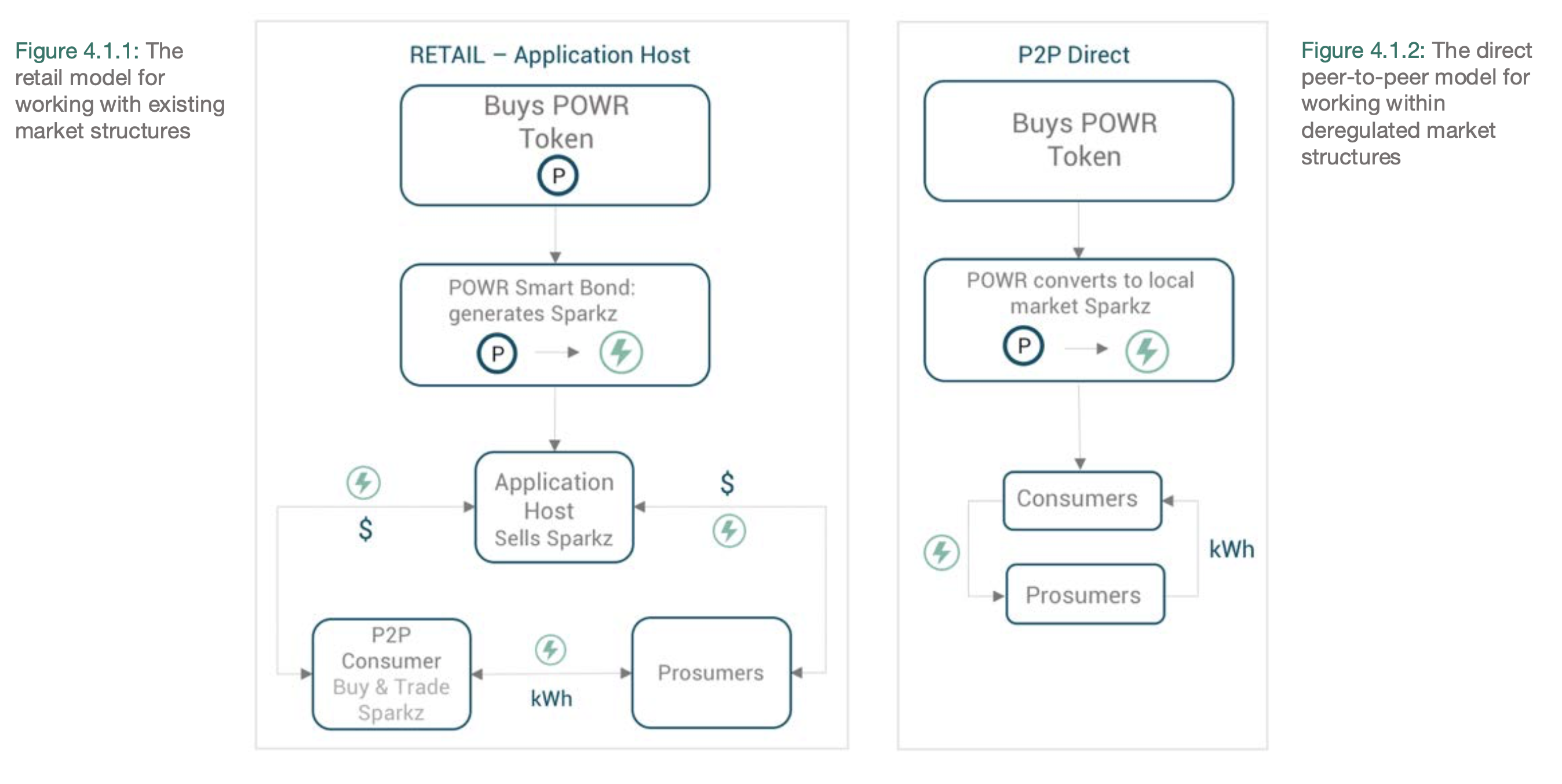 When a utility company and customers want to gain access to the Power Ledger Platform a bond must be paid in the form of power tokens (POWR). These tokens can also be independently traded outside the platform as a digital asset on eligible exchanges. Sparkz is an exchangeable energy trading stable token, that can be used when units of electricity like kilowatt hours are bought and sold on Power Ledger’s platform. These tokens are automatically converted into sparks from the local fiat currency to enable energy trading. When energy transactions are settled, sparks are automatically converted back into the customer’s chosen currency. For example, one spark in Australia is one cent, or one spark in Thailand is one Thai baht.

Sparkz are issued against escrowed power tokens via a blockchain enabled smart contract. The Sparkz are sold by the retailer to consumers who use the token to pay for energy. Utility companies need POWR and consumers need Sparkz.

Jemma points out that in the past being sustainable didn’t always make economic sense. She believes that now making money and delivering sustainable outcomes can be intimately linked. This however depends on how the markets are set up and the incentives created through products and services can support that.

Power Ledger’s platform provides a market mechanism that encourages people to install battery systems that can stabilise the grid and stay connected to the grid. In the past batteries were installed by consumers to self-supply and to be less reliant on the grid. The drop in price of solar panels and batteries makes sense to use them without government subsidies.  Connecting them to the Power Ledger platform enables consumers to trade and generate new revenue streams out of them.

Electricity markets for a century had the market built on top of the physical system used to service it. Now there is an inversion where market mechanisms can create the right kind of behaviours that deliver distributed electric market that is stable, clean and low cost.

COVID-19, a wakeup call for the energy sector

Jemma recently wrote an article on Forbes “COVID-19: The Wake-up call the energy sector needed”.  COVID-19 has heightened people’s desires about how to become more self-sufficient. In Australia there has been a strong demand for solar battery systems since COVID-19.

Large retail outlets are thinking about how they can incentivise customers back into stores by purchasing their customers’ electricity in store vouchers thus creating a green barter system.

Energy networks, retailers and operators have delivered services in much the same way for a century – driven by fossil-fuels.

New technology is making it easier, more effective and affordable to use renewable energy, and the costs associated with installing those technologies, such as solar and batteries are decreasing.

And most industry players recognise the need to change and evolve in order to remain relevant, or are at least are starting to, with a little nudge from COVID-19.

Self-generating renewable energy infrastructure gives people the power to become self-sufficient for their electricity needs, with some even going ‘off-grid’ altogether. There is more of a sense of urgency to innovate right now and to make decisions.

Global catastrophe’s like COVID-19 are also a catalyst for many things that are ripe for changes in a similar manner as how World War One saw more women get into paid work.

Power Ledger is working with a number of companies all across the world from Europe, to Asia and North America. Power Ledger doesn’t see itself as just selling a piece of tech. They want to help their clients achieve what’s of fundamental importance to them and to help them reach those ambitions.

In France, for example, they are working with the green energy retailer, ekWateur. ekWateur recognises that their customers want to be able to choose their energy mix, they want to be able to say I want solar from this farm, wind from that farm, and, and solar from my neighbours. Power Ledger’s platform enables their customer base to achieve that.

In the US they have partnered with Clearway Energy Group to roll out a digital commodity trading software in the United States to develop a platform to trade Renewable Energy Certificates (RECs) in the US. Clearway Energy recognises that blockchain can significantly improve the efficiency for the trading of RECs by linking transaction functions within a common platform.