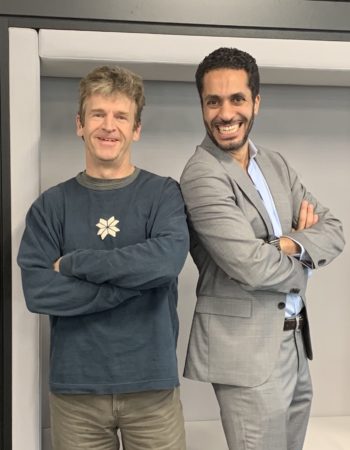 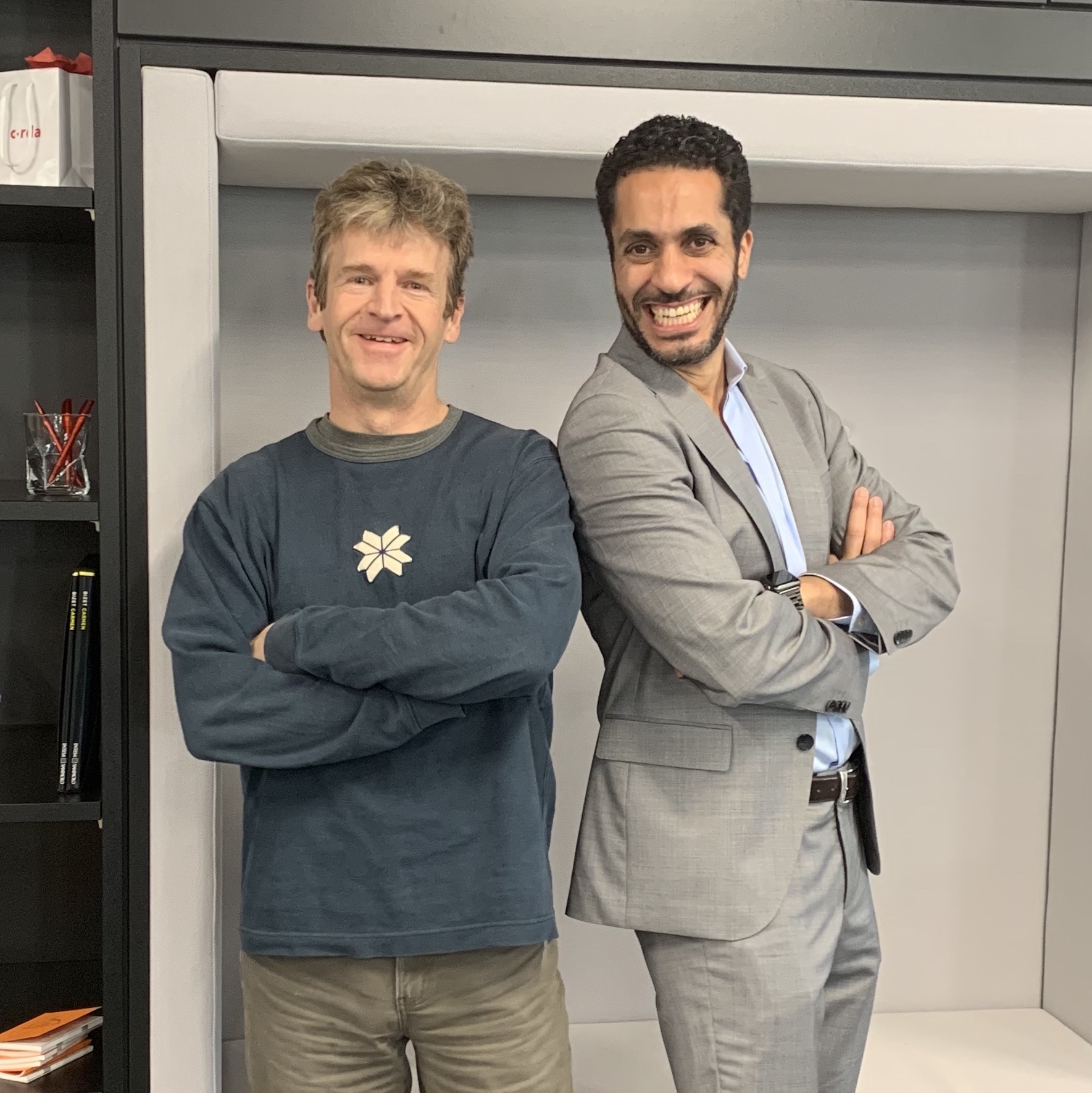 Over the last 12 months Decentralised Finance also known as DeFi has really exploded with reported total value locked reaching $250bn.  R3 who operates in the permissioned blockchain space is spinning out Obscuro into the permissionless space of DeFi. In this podcast we’re joined by James Carlyle who explains the DeFi landscape, the challenges it faces in terms of privacy and scalability and how Obscuro can address these.

Blockchain is a distributed databased. Instead of one party running it, it is run as a network by a group of entities who don’t necessarily trust each other. It contains features that ensure that entities don’t need to trust each other, they can trust the infrastructure and the code itself.

For James, Defi is an expression of freedom and of innovation. It’s growing very rapidly as it’s able to innovate at lightspeed. All of these applications are open source which means that it is possible to take an existing idea to either build upon it or in some cases to steal it and simply rebrand it. These things increase the level of innovation and increase the level of take up.

At the heart of DeFi is transparency. It runs on permissionless systems, which means anyone can take part, download the data and help in the validation process.

Whilst privacy is important it can unfortunately also be used as a cloak for illegal behaviour. For DeFi to be picked up and used by the mass market it has to be more regulated. Regulation needs identity and KYC. R3 is uniquely placed to interact in this space as it has this rich heritage of having very strong ties with regulation and regulators

In a public blockchain system such as Ethereum there are participants who are submitting transactions. Miners who are here to confirm transactions can see the contents of the transactions that users have submitted. They can take advantage of it in some cases in what is called front running. For example, if you want to buy something on the market you don’t want someone else to bid the price up ahead of the transaction. That’s what is possible when a miner can spot that a user is trying to something and they decide to step in first and thus get the transaction before the user and the user is left behind buying it at a higher price.

It has been estimated that around $1.4 billion of MEV is being taken from Ethereum blockchain users annually from a total DeFi market of around $50 billion. Global financial markets are worth $100 trillion. One of the main motivations of Obscuro is to help solve some of these issues.

Ethereum to some extent is a victim of its own success as it suffers from scalability issues. With the explosion of DeFi projects, and their corresponding transactions that need to be processed by all of the nodes on the Ethereum network, that has created a bottleneck issue where people have to bid more to have their transactions processed.

The fees to process the transactions can start to rise very rapidly where whilst it may not be felt so much for low value transactions but for a newly minted NFT piece of art the fees can go very high.

To address this issue other layer 1 networks (L1) like Ethereum, such as Solana, Cardano or Avalanche who reduce the number of validators in the work, or require the validators to run more powerful hardware.

Obscuro, whose origin is Portuguese means “obscure” in English. For James and his team they chose Obscuro due to Harry Porter as it was the incantation of a charm used to conjure a blindfold over the eyes of the victim, therefore obstructing their view of their surroundings.

The objective of Obscuro is to provide confidential, smart contract execution. 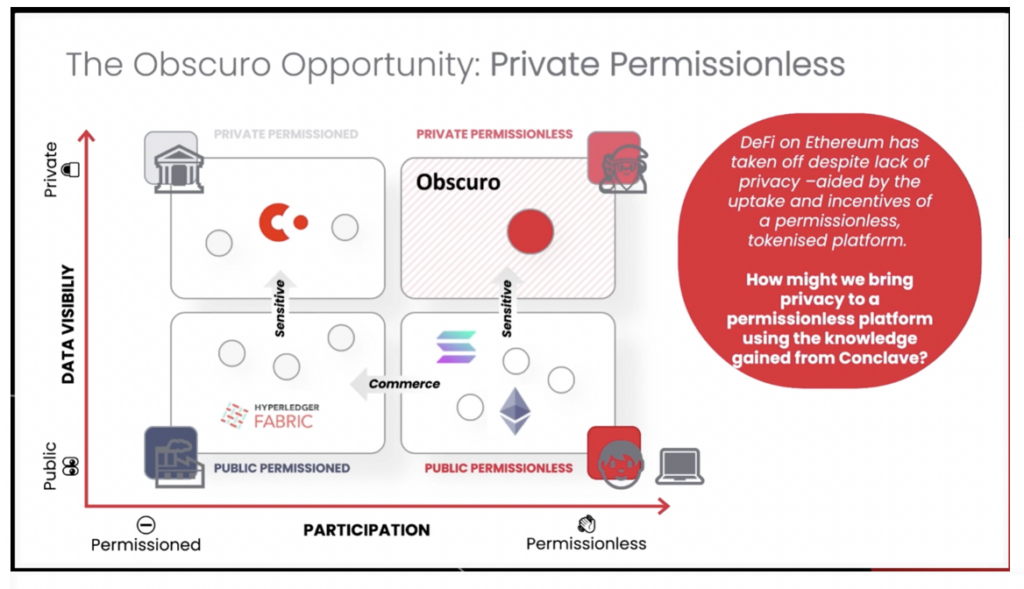 It means that until now applications that may have been deployed directly onto an Ethereum distributed application or deployed onto an L2 network, they can now be deployed onto an Obscuro network. The contents of those contracts would remain secret and hidden from users.

The network processes the transaction and updates the state of the contract. To illustrate this, James provided us with an example of an auction. In an auction on Ethereum everyone can see all of the bids, they can see the addresses of the bidders and the bidding patterns. An auction contract deployed onto the Obscuro network would be hidden. It’s effectively a sealed auction with sealed bids. No one can see other bids. The bids themselves have been encrypted and the linkage of the bid to an identity is also hidden. Privacy is thus achieved for users. Whilst privacy is achieved it isn’t an ultimate form of privacy as if necessary law enforcement bodies can take action against those who would use Obscuro for illegal actions. 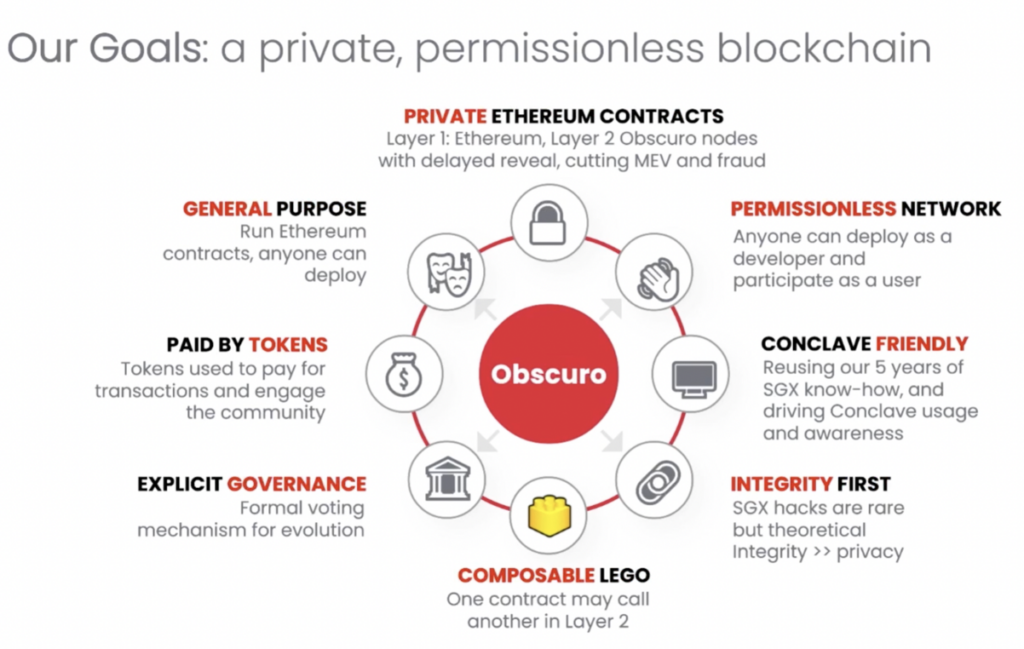 There are a set of economic incentives for people to participate in the network whether they are users or aggregators. Users get some personal benefit from transacting within these contracts whilst aggregators need to be rewarded for running infrastructure. These rewards will be some form of utility token.

James expect that they will set up a decentralised autonomous organisation to govern this network.