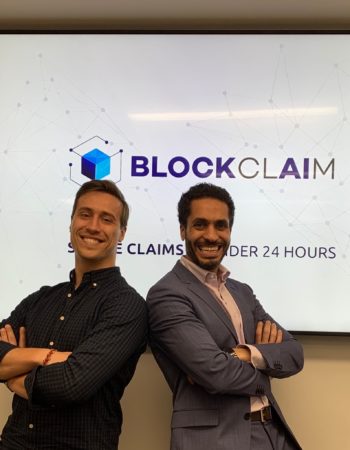 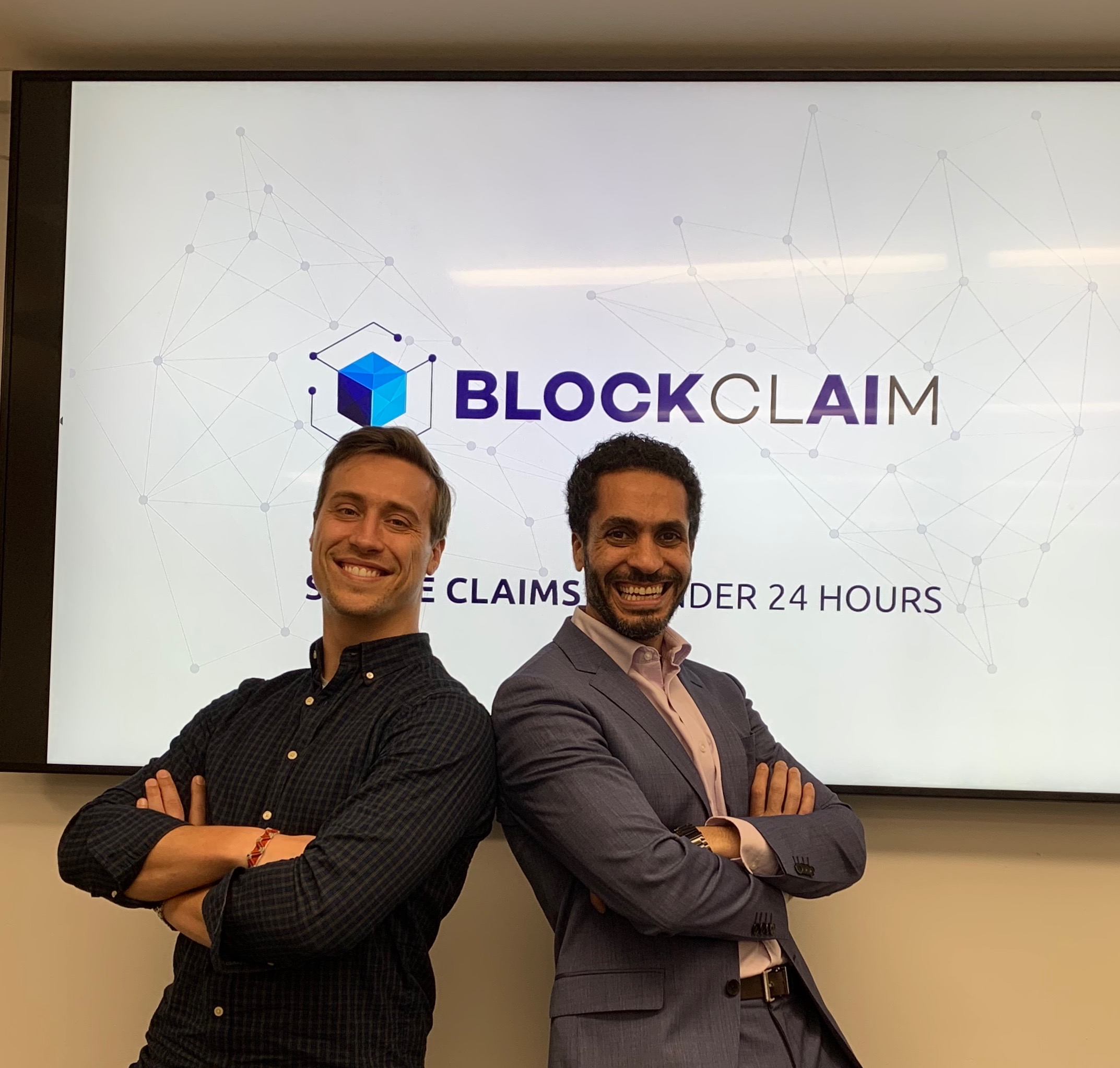 On a high level blockchain is all about storing and processing sensitive information, like financial transactions, on a lot of different computers rather than with a single central authority. What this means is that the need for trust in a central authority is removed because if it fails the network doesn’t fail. For BlockClaim, a private blockchain is a great way to connect various actors with different systems, software or legacy IT in a super light touch way. It allows BlockClaim to gather information from all these different systems in real time without interfering any kind of workflows.

Blockchain creates a unified data format that allows you to feed that into any AI or machine learning and increase its efficiency through the use of smart contracts for automation of workflows or processes of claims for example. 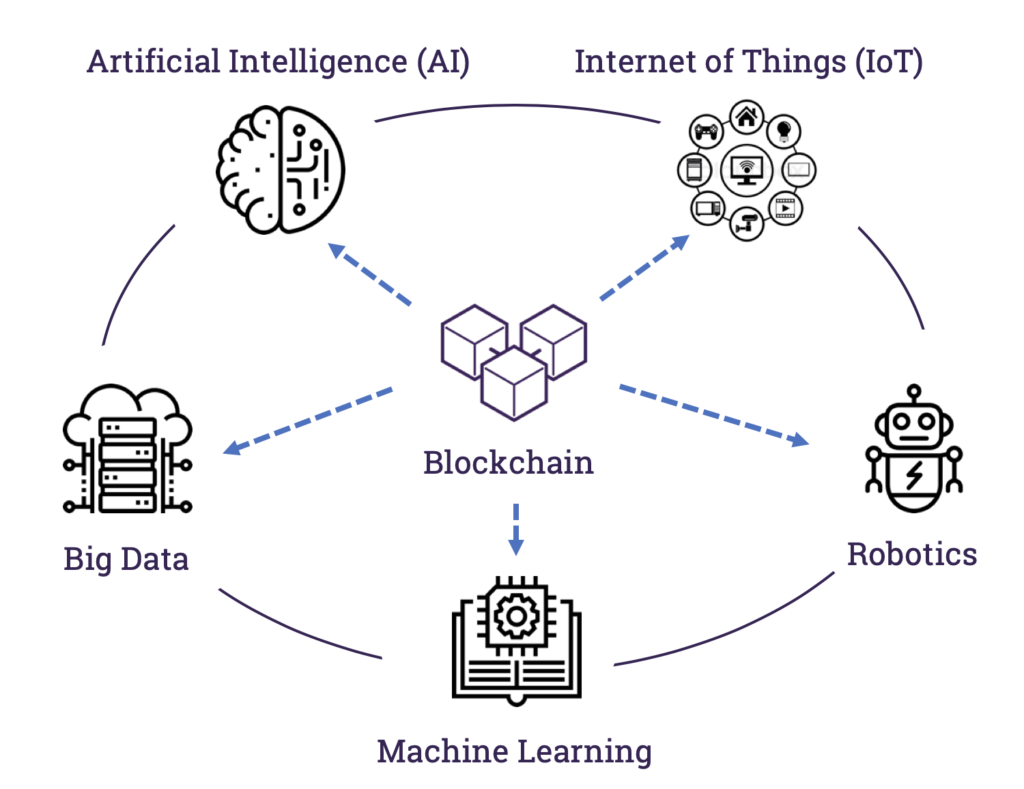 Here at Insureblocks we are great believers that the future resides in looking at emerging technologies such as blockchain, AI, machine learning, IoT, big data, and robotics as the “new stack”. Because it is only by combining them that we can really get the most ROI out of them. We asked Niels his thoughts on how the insurance industry was embracing these new technologies.

However Niels is quick to point out that sometimes you meet a C Level director that gets it and sees the value of combining these new technologies to help them achieve their vision. He gave the example of a CEO of a bank insurer who stated her vision of settling claims in one day and wanted to find out what set of technologies would help her achieve that vision.

Innovation department at insurance companies are also a great way for start-ups to have that first conversation. However these innovation departments are more like gatekeepers who do put you in touch with different sections of the business but they don’t have any budget or any kind of decisive authority.

In episode 40, IBM’s 2019 Insurance Predictions, we interviewed Sandip Patel, global managing director for insurance across IBM. In podcast he stated that there is a fundamental shift in how we think of data. Where data is becoming the next natural resource, particularly in Insurance from a few perspective:

Blockcliam is both an aggregator of data and an enricher of it. Data basically enables BlockClaim to make informed decisions in an automated way. Claims for example can be very subjective. Recognising that claimants may lie, a claims handler has to try and reconstitute an objective reality of what happened. What BlockClaim aims to do is to automate that. They leverage external and internal data such as “dark data” to enrich the whole claim process. Dark data is any data such as PDFs, emails, images (eg. of a car accident) that aren’t in the right systems which makes it difficult to mine. However it is data, usually stored in an email inbox, that a claims handler evaluates in an intuitive way.

One of BlockClaim’s USP is in creating new data sources. Looking for better APIs, building their own spiders to aggregate data, plugging into IOT such as wearables and combining all of that with an insurers own internal data gives BlockClaim the opportunity to build the ultimate contextual engine.

BlockClaim’s aim is to help insurers to settle claims in 24 hours. On average claims in the UK, depending on the verticals, takes about 25 days. This is often due to sequential processing, outdated systems and an ecosystem that involves numerous players. BlockClaim wants to offer lemonade style claims for everyone.

BlockClaim offers three different ways to integrate with an insurer: 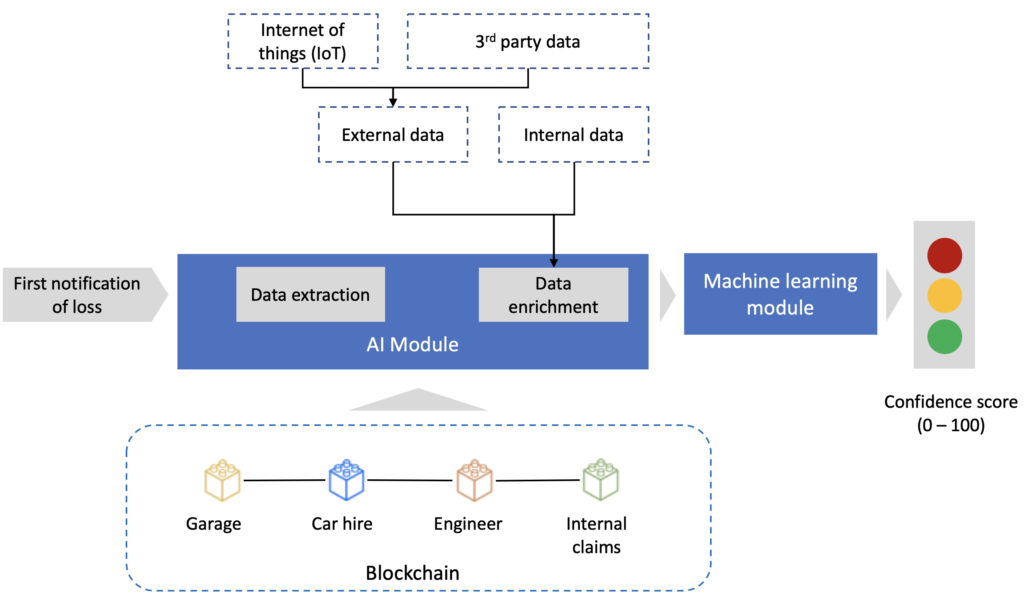 BlockClaim uses a mixture of AI, machine learning and deep learning on a blockchain to deliver their 24-hour claims vision. The AI and the blockchain section of their proposition comes in two modules.

The AI module. When a claim comes into the system the AI extracts the data and enriches it with external data such as IoT and internal insurers data that includes dark data. With machine learning it generates a confidence score between 0 – 100 in a kind of traffic light system.

Insurers work with a number of TPA who provide every month an excel file with claims data. A key frustration insurers get is that they don’t get to control the data. They don’t have visibility of the data now can they audit it. With this blockchain related solution of the ecosystem, insurers can now have clear visibility of their data.

Each ecosystem player’s data is fed into the AI and you can start getting a real time confidence score every step of the way in the claims process along the blockchain.

Depending on the level of the confidence score you have a triage system, that can determine to which next step the claims process should take and that includes skipping several steps in the process thus reducing the settlement time.

This process is also very effective in capturing fraud that can be operated by criminal gangs that may involve the participation of service providers (e.g. a garage).

Niels recognises that the insurance industry is very polarised around the question of blockchain and on whether it’s a yes or no question. For him it varies like 50 shades of grey. You can use a distributed database, but if you have more than five or six participants it becomes incredibly difficult to manage a permission system. Blockchain has a built-in permission system. It is the best and cheapest way to effectively work with various partners or actors in a system with over three or five players.

BlockClaim started at Imperial College, about 2 years ago out of a POC (proof of concept)  that was about blockchain telematics and insurance. The company then evolved towards working with motor insurance first and now recently moving into health claims. BlockClaim analyses five million claims. Their next step is to move into lines of business such as fleets, home, pets and kind of PNC lines and some kind of commercial lines.

Insurers who work with Blockchain have been looking at expanding their collaboration with to cover the underwriting side. There is a real opportunity in using BlockClaim’s ability to aggregate and process large amounts of data (external and internal) for not just managing claim but also in helping underwriters’ better price themselves.

Top tips for Insurtechs in working with incumbents

Niel’s main tip to Insurtechs is to raise funding from a mix of sources. Make sure that your investors have a great black book of contacts that can offer you introductions and warm leads that allows you to bypass a lot of the steps that you normally have to do. Sales cycles for example can be very long up to 9 and 12 months long. Getting access to the right C-level people, product owners and budget holders can make a significant difference.

Business angels with an insurance background or former C-level individuals are great to providing those kind of introductions and thus play an important part in getting the right mix of funding sources.

Niel’s second tip is try to get a soft landing. Always offer insurance companies with an easy way for them to sign up to try your product.

Niels have shared some great insights with us on the convergence of AI, machine learning, and blockchain.