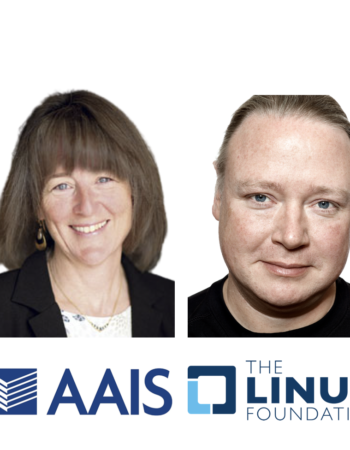 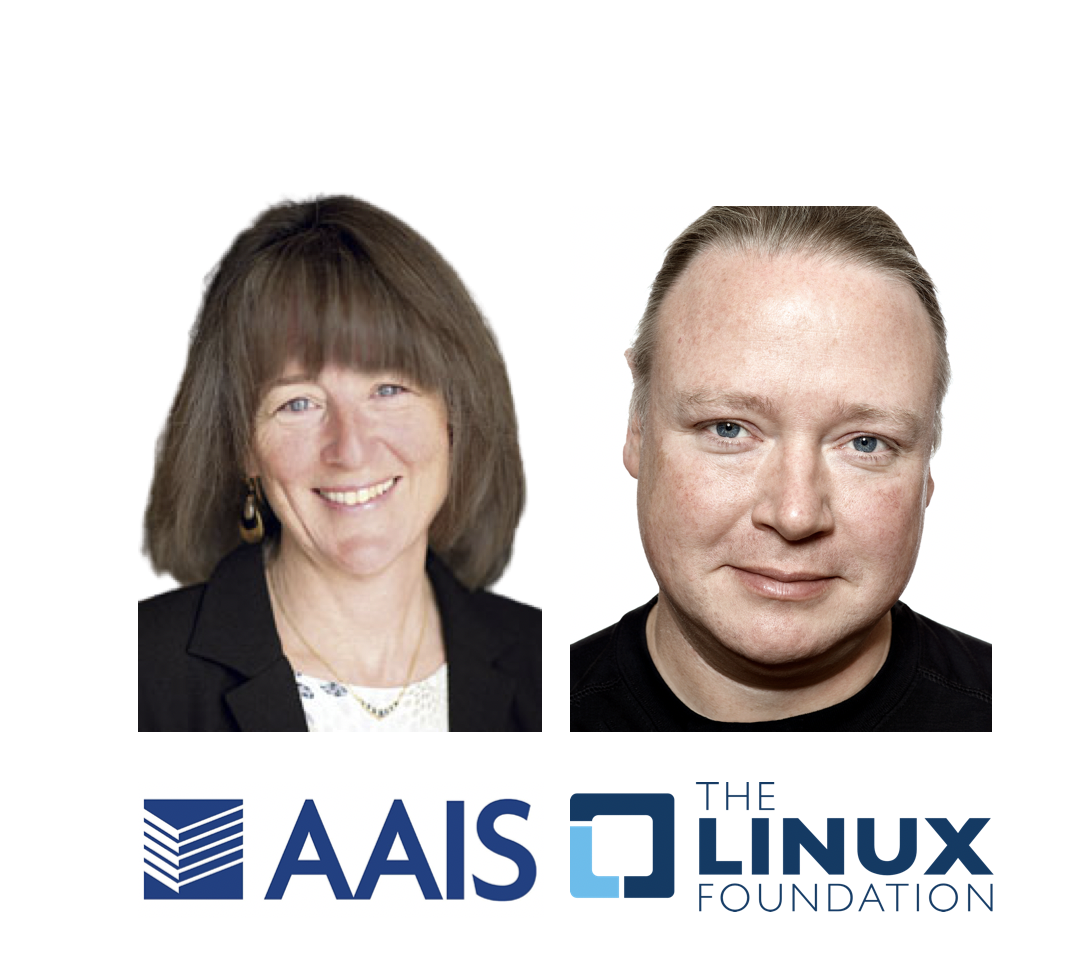 Joan: distributed ledger technology is a technology that provides a way to have immutable records in the digital world, in a networked environment. Blockchain is used in a number of ways in addition to cryptocurrency, such as for business applications that require data security, privacy and an immutable record. OpenIDL uses blockchain to pursue a path of data security, privacy and transparency.

Brian: blockchain is a shared system of record amongst participants in a commercial ecosystem. Brian, compares blockchain to the mid and late 90s when a group of folks were talking about free software and working on projects with no justifiable economic basis behind them such as the Apache Software project and the Linux project.

Insurance have been conservative about adoption of new technologies, open source software and blockchain technology. However, Brian now thinks that insurers now see blockchain as solving some real problems, particularly problems created in understanding risk within a regulated environment.

Blockchain helps organise an industry to solve a collective problem. A shared system of record, with automation through smart contracts is an essential part of solving these problems and doing that in an auditable and verifiable and, and regulatable way.

AAIS is a US based advisory organisation. In the United States, insurance is regulated at the state level. That poses some issues when you’re trying to offer insurance products nationally. The National Association of Insurance Commissioners or representatives from all the states got together and they said we need an organisation that can help them collect data on the insurance market and provide some perspective at the national level. They can use that data to develop products that can be filed in all 50 states to provide a common foundation for insurance companies to add value on top of that with some consistency across all 50 states.

For the last 80 years AAIS has been authorised to collect data from the insurance carriers as an advisory organisation licenced in 50 states. AAIS is allowed to collect data that insurance companies wouldn’t be able to share between themselves due to antitrust concerns. AAIS uses that data to provide reports to the regulators and to develop products that they use.

20 years the Linux ecosystem was composed of a number of open source contributors from RedHat, HP, IBM and thousands of other contributors. A consortium approach was set up as a home for the Linux project where the basic sustainability model was companies paying membership dues tiered by the size of the organisation. They weren’t pay for software development but paying for the coordination overhead, or as Brian calls it, the air traffic control function to all the different contributions coming in.

After a few years there was a sense that this model was stable, that it was reliable and replicatable. The model was thus used for adjacent technology domains like cloud computing, software define networking and industry specific domains like automotive software. For each of these projects there is a clutch of companies who pay yearly membership dues to provide the core essentials, small staff to serve in that air traffic control function and coordinating functions. This has led to the creation of over 400 different projects.

When Hyperledger started five years ago, it was started and continues to be managed in this kind of model where it has its own membership, budget and it is overseen by its own governing board which makes it accountable to its membership. All of its activities are public facing and you do not have to be a member to download the code to use the code for any reason. All the code is under an Apache license.

Hyperledger is the enterprise blockchain, open source community that builds the software that is behind products like Hyperledger Fabric, Hyperledger Besu, Hyperledger Sawtooth, Hyperledger Indy an Hyperledger Aries. These technologies are for organisations and consortia to build their own distributed ledger systems.

In August 2018 the AAIS launched the Open Insurance Data Link known as OpenIDL with the stated purpose of creating a solution for the insurance industry to solve a problem on data security, privacy and transparency on how data was used. However as they started working on OpenIDL and building out that solutions by working collaboratively with insurance carries, regulators and data providers they realised that this solution could serve many industries in addition to insurance.

OpenIDL was launched with the initial use case of regulatory reporting to demonstrate the technology itself and the solution it provides. The created solution is one where the carriers can keep their data private in their own data centre, what OpenIDL calls a harmonised data store. It is a data repository according to a standard that merges all of the regulatory reporting requirements that a carrier might face.

A partnership with the Linux Foundation enables OpenIDL to access a wide range of talent to continue develop the platform not just for the PNC insurance industry but for their partners such as ones in the fire protection and automotive industry to name a few.

Chainyard is an infrastructure partner helping OpenIDL with the technology platform and ensuring that it is easily installed and maintained in multiple cloud environments.

OpenIDL has had a long relationship with MOBI (Insureblocks podcast with their CEO, Chris Ballinger). MOBI is interested in data standards and technology platform that support the exchange of automotive information. The insurance industry has a number of auto products that would benefit from a relationship with MOBI.

KatRisk provide catastrophe modelling software with an expertise in flood whilst RMS have a broader platform looking at other types of types of risks such as hurricanes and wind losses. OpenIDL has been working with KatRisk and RMS on a working group focused on floods in the United States. The objective of that group is to gain access to better information, better flood models, better policy and claims data in order to provide a better solution for flood risk and perhaps partner with the federal government to create a new programme that would provide better coverage across the United States.

Whilst KatRisk and RMS are competitors they see value in both competing and adding value on top of the OpenIDL network.

When looking at the permission blockchain space, it became evident that a lot of blockchain initiatives didn’t make it past the pilot was inevitably a lot of them are put together with a company at the centre of that network. This would cause the other participants to question whether this was a truly distributed network and how different is it to a company saying “we’ve got a central database just trust us”.

What is core to the open source movement is the “do-ocacy” principle: “Open source projects adopting the “do-ocracy” governance model tend to forgo formal and elaborate governance conventions and instead insist that “decisions are made by those who do the work.” In other words: In a do-ocracy, members gain authority by making the most consistent contributions.” Source: The Open Source Way.

Having the do-ocracy principle along the transparency principle is core to the open source movement. These principles along with the members of a blockchain consortium providing the financial support for “air traffic control” also apply to management of a permissioned blockchain network.

With regards to governance, Brian looks to ICANN (Internet Corporation for Assigned Names and Numbers) is responsible for coordinating the maintenance and procedures of the global domain name system on the internet. They do their work via a set of contractual relationships they have with domain name registrars around the world. Thus by applying a mixture of technical governance and human governance you have a process to bind nodes on a permissioned blockchain network in an open and transparent manner.

This episode is brought to you by Chainyard, an IT People Company.

In this hyper-competitive environment, businesses need to modernize today more than ever. Chainyard is a digital transformation specialist, and a technology partner that can help you modify your existing business processes, culture and customer experiences to meet the changing business and market requirements.

Chainyard is an Infrastructure Member of The Linux Foundation openIDL project and can help you develop a strategy to benefit from this novel blockchain centric, open source project. Our services span advisory, engineering, and operations helping you to have a single trusted partner in your digital transformation journey.

Check out chainyard.com to learn more about Chainyard.