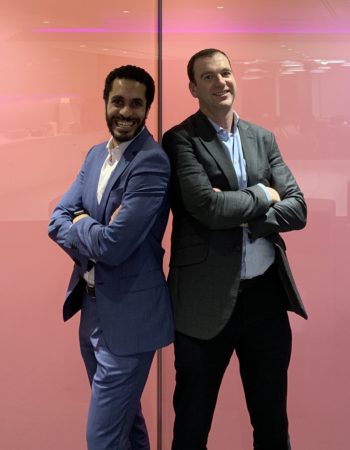 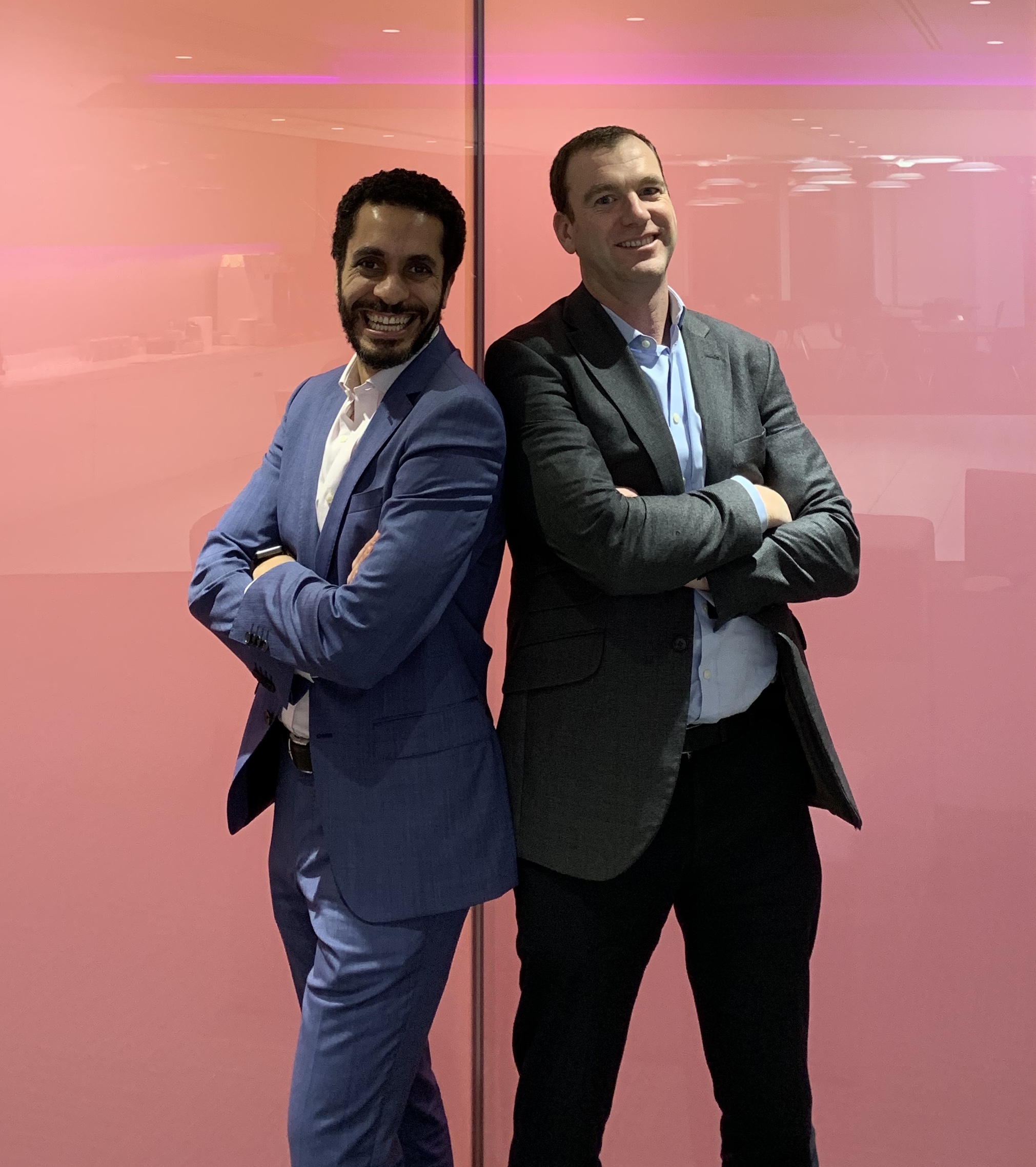 For this week’s episode, we spoke to Steve Pomfret, CEO at Cygnetise. Steve describes himself as a “process guy” with over 18 years of experience in bringing about operational change (efficiency and de-risking) at reputed banks and brokerage firms.

After learning about blockchain, Steve spotted an opportunity to apply his skills and learnings together with blockchain to streamline processes within the financial ecosystem.  Presently, Cygnetise has one blockchain application used for management and distribution of authorized signatory lists such as delegated authorities, bank mandates etc.

According to Steve, blockchain has 4 pillars –

Lack of universal terminology as a barrier

Steve makes an excellent point – since blockchain is a nascent technology, there are no universally accepted definitions for key concepts. To begin with, blockchain purists and business practitioners disagree on whether industry deployments of “blockchain” are “blockchain” or “DLT” projects.

Barriers to adoption of blockchain across industries

“Part of the adoption (of a new technology) is to break it down into something that is useful at a process level and then you can build and evolve as opposed to revolutionize.”

Blockchain as a nascent technology

Steve recalls the first time he read about blockchain in a newspaper – the article spoke about how blockchain would “revolutionize” trade, clearing and settlement process within the banking ecosystem.  His initial reaction was that of surprise – as he rightly points out, how could you realistically expect hundreds of ecosystem participants spread across the world to each adopt a new technology almost overnight? In his opinion, such claims are equivalent to stating that it would be possible to build Facebook overnight.

The message is clear – change doesn’t take place overnight; more so at financial institutions since they are subject to strict internal and external scrutiny – new technology needs to pass through checks before reaching commercial deployment.

According to Steve, the more complex a blockchain based solution is, the harder it becomes to integrate the solution with the existing technology stack through API’s. Furthermore, he highlighted that another approach would involve identifying manual processes within an organization or an ecosystem that can be replaced by technology (perhaps, blockchain.)

How to build a business case for blockchain deployment?

“Companies that we’ve been talking to are nervous about holding their customers data .”

During the discussion, several interesting points were raised that could be used to support a case to deploy blockchain within a business –

2. More efficient use of (customer) data

As Steve mentions, the introduction of regulation such as GDPR has made businesses wary of storing more customer data than is necessary – the quantum of fines for data breaches under GDPR are enough to put SME’s out of business!

During the conversation, Steve makes an indirect reference to the growing commercial interest in “self-sovereign data identities.” Reputed high-street banks such as Barclays have tied up with Everynm to explore self-sovereign data identity through Sovrin (a public permissioned blockchain protocol.) The idea behind doing so is to give customers ownership of their own data. Thus, under GDPR, businesses would no longer liable for data breaches.

Steve provides an interesting blockchain use-case that has been explored by Cygnetise – bank mandates. Organisations have designated individuals who are permitted to initiate bank transactions from the company bank account on behalf of the company.

If one of the signatories were to leave the organisation, the process of revoking authority to make payments is long-drawn, manual and paper- based i.e. prone to errors, delays and potential fraud.

After a form is filled out, it is posted to the bank which converts it to a PDF format to send to another department where records are manually updated – a process which takes at least a few days!

With blockchain, this process can become instantaneous.

Steve points out that it is possible for a centralized database to eliminate this paper-based process, but, blockchain offers two additional benefits –

Steve highlights that using a blockchain based solution for changing bank mandates poses the same risk that would be faced in the original process – at the end of the day, in both cases, there would be a human that removes the entry (or decides to remove the entry.)

Companies maintain central databases to mine data and use the insight generated to offer better products to customers. To continue with a similar model would require a hybrid solution where cryptographic hashes of data are stored on chain and the data itself in stored in secure off-chain databases. If a customer provides consent, then the company can mine the data (in accordance with GDPR.)

How to overcome the legacy mindset?

“Everyone wants to see somebody else go first which is the biggest issue.”

Steve points out that a good starting point for blockchain is “utility applications” where blockchain comes in to replace a manual process – the business use-case should be strong enough for the focus to be on the benefit to the end-customer (or to the business) rather than on the underlying technology (blockchain.) Steve goes on to state that Cygnetise pitches the bank mandate product as a solution to a problem rather than as a blockchain product.

Improvement in customer journey and reduction in costs will spark blockchain adoption – Cygnetise clients have provided them with excellent feedback on their product and as adoption rates increase, it creates the ecosystem needed to fully unlock the potential of blockchain.

An example from the insurance industry – Fizzy by AXA

Fizzy is an Ethereum-powered flight delay insurance offered by AXA. In an earlier episode, Laurent Benichouspoke to us about the product launch and it’s value proposition.

For this product, blockchain replaces the traditional process of making a flight delay insurance claim which involves getting a note from the carrier about the flight arrival time, filling in a form and then filing for a claim. With Fizzy, a delay of at least two hours, automatically triggers a pay-out to the customer (enabled by smart contracts.)

Fizzy isn’t marketed as a “blockchain based” insurance product rather it is marketed as “smart insurance, automatic compensation” – precisely it’s value proposition. 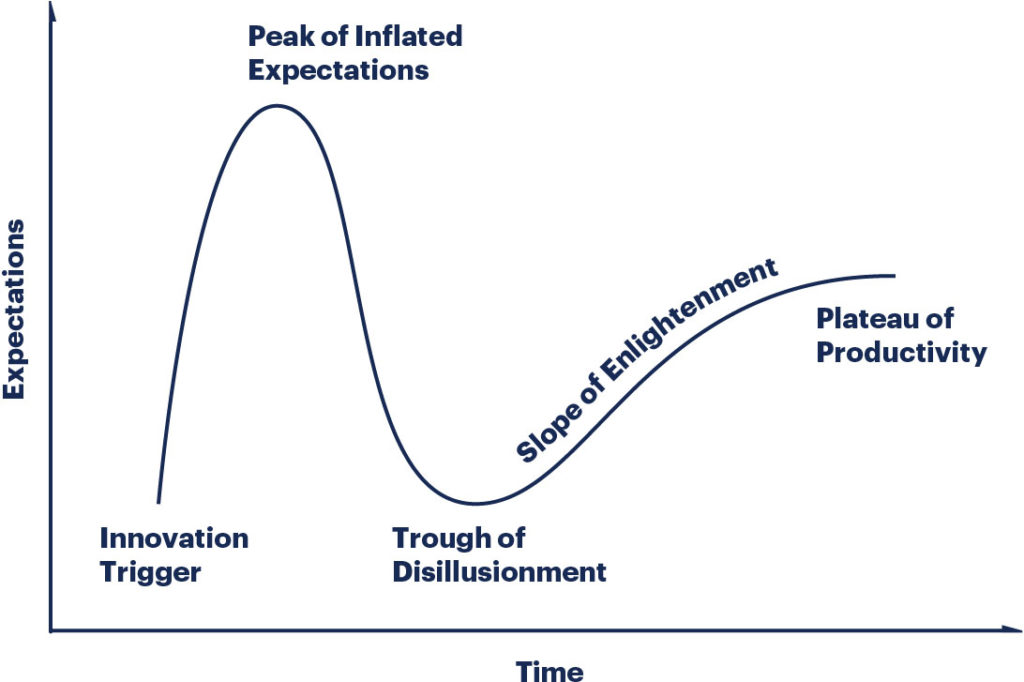 Rather unsurprisingly, Steve stresses that people need to get over the “blockchain thing” … parallels may be drawn between the “dot com bubble” and the “blockchain hype.”

According to Steve, not enough companies are working on process level applications – there is a lot of emphasis on carrying out Proof-of-Concepts (POCs) by large enterprises – but these projects appear as press releases and then nothing else is heard about them later. We are currently in the “trough of disillusionment” phase of the Gartner Hype Cycle for Emerging Technology – it will be a few years until blockchain will go mainstream.

Blockchain is becoming increasingly important – governments and corporates across the world are beginning to take an active interest in blockchain. For example, recently Amazon Web Services (AWS)has started to provide a managed blockchain service. There is a lot of interest in the legal profession regarding the legal status of smart contracts – a topic frequently debated in the community.

Steve has provided some excellent insight into the key barriers to blockchain adoption.