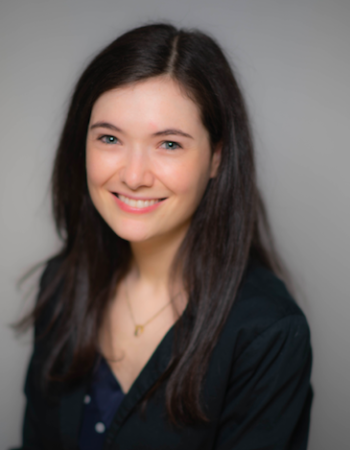 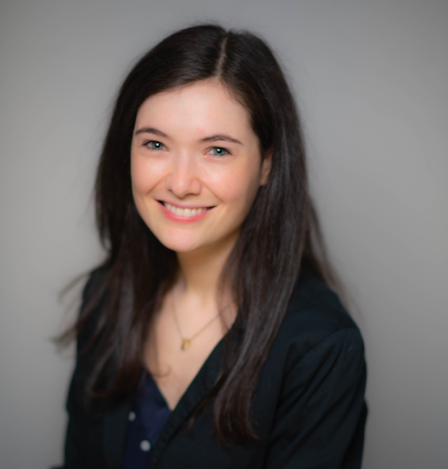 Cecilia Chapiro, is the Investment Adviser & Blockchain Portfolio Manager at UNICEF Ventures. Her focus is on sourcing investments across developing and emerging markets, managing blockchain portfolio of investment as well as other frontier technologies. In this podcast she introduces us to the UNICEF Venture Fund and to 3 startups use case studies: OS City, Atix Labs and StaTwig.

Cecilia, is also an entrepreneur, having co-founded Yunus & Youth an organisation working to support the growth of social entrepreneurship. 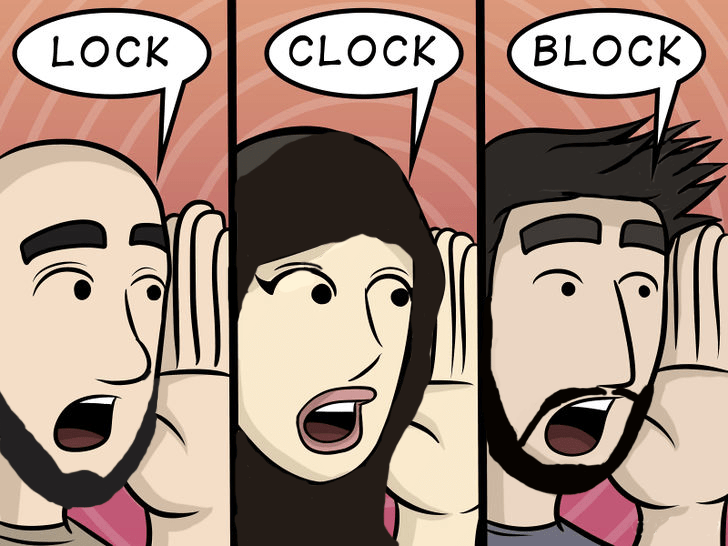 Cecilia, chose to define “what is blockchain” by assuming that we’re all at a party and we’re playing the telephone game also known as Chinese whispers. It’s essentially a word game, a communication game within a circle of friends. Let’s imagine that within a circle of 20 friends one person comes up with a first phrase and starts a chain of communication by whispering that phrase to a person on their left. Each person then takes what they heard and continues the chain of communication by whispering this same phrase to the following person.

This continues until it reaches the end of the circle back to the original source of truth. What usually happens is that the message gets distorted either intentionally or unintentionally. But because there’s only one source of truth, any individual within that network who receives the message has no idea how truthful the statement that they received, is.

However, on the opposite end, if we think about that first person, the original source of truth, the creator of that phrase. If he/she announces the phrase to the entire group at the same time, then even if one individual decides to distort the message, there’ll be enough members of the group who can attest to the one source of truth. The truth is determined by the majority.

For Cecilia, this is what blockchain is all about. It’s distributed data that allows any member within the blockchain network to have a copy of all the data at all times, thus ensuring maximum security of the data. 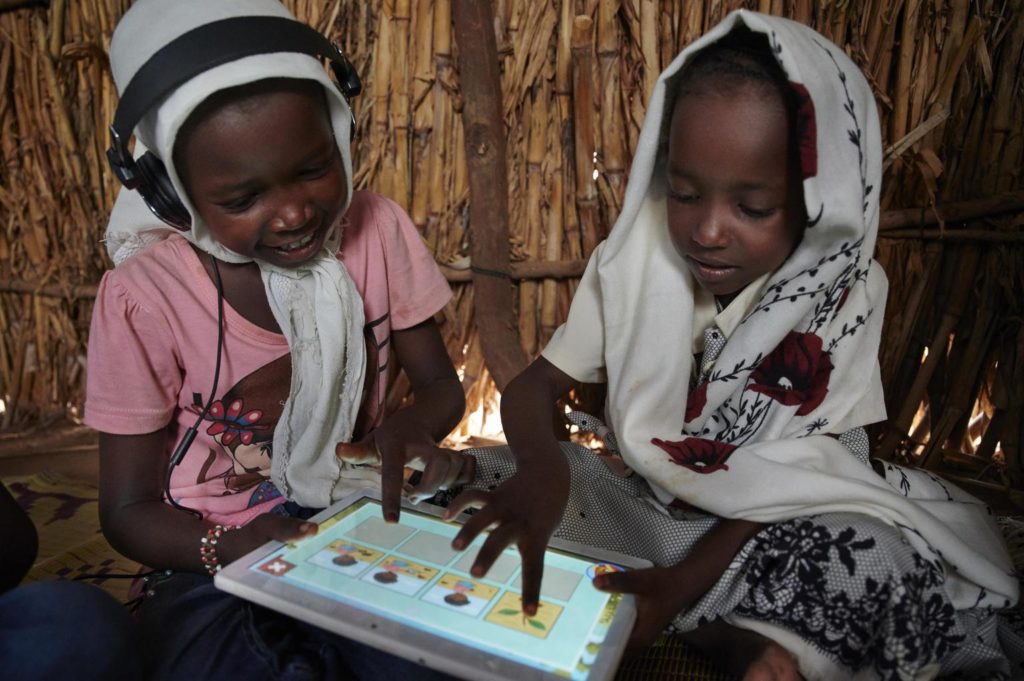 Blockchain is one of those key technologies that the fund focuses on. The fund’s main objective is to scale the successful technology solution into digital public goods to ensure open access to these new tools and the benefits that these tools can generate globally.

UNICEF Venture Fund provides startups with up to $100,000 of equity free funding. For this year’s cohort the investment opportunity is a blend of both USD and cryptocurrencies thanks to the UNICEF’s crypto fund that was launched in October 2019. This crypto fund is the first cryptocurrency denominated fund within the United Nations.

UNICEF doesn’t get a financial return on the investment but instead gets a return on the social impact their investment can have. They only invest in solutions that intend to be licensed as open source technologies.

The open source technology that the UNICEF Venture Fund makes available to the world is basically their equity.

The Venture Fund sits in the UNICEF Office of Innovation, a team that explores the potential of frontier technologies to improve the lives of the most vulnerable children in the world.

Blockchain is not the only technology the Office of Innovation focuses on, but it’s definitely one of the main ones. The reason being that while there’s not enough proof to understand the impact of the technology, in full, there’s enough evidence to indicate that the benefits to society are worth exploring and prototyping. That’s why for now blockchain explorations sit primarily in the Office of Innovation and are not yet ingrained in one of the main divisions of the organisation like, education. UNICEF is prototyping and exploring the technology to better understand and gather evidence on its potential impact.

Selection criteria for startups and onboarding

The UNICEF Venture Fund looks for companies that have a prototype and some evidence that indicates that their solution has the potential to improve society and ultimately improve the lives and well-being of children.

Assessing the team behind the startups is equally as important as assessing the product, especially in this early stage. Whilst the idea of a startup is important, the real value comes in the team’s capability to execute, team’s understanding of the problem, the engagement with the ecosystem and their previous experience.

The team needs to be well engrained within their local community with a good understanding of the local problems they are addressing.

Having completed the 6 months selection process the startup joins the UNICEF Venture Fund portfolio, with a prototype of their product, for a one year experience. The fund focuses on supporting and strengthening their solution for them to grow and ultimately impact as many people as possible.

The fund organises an onboarding cohort workshop where they are set up with mentors who will organise periodic mentorship sessions on a technical and business level to help them grow their open source community. 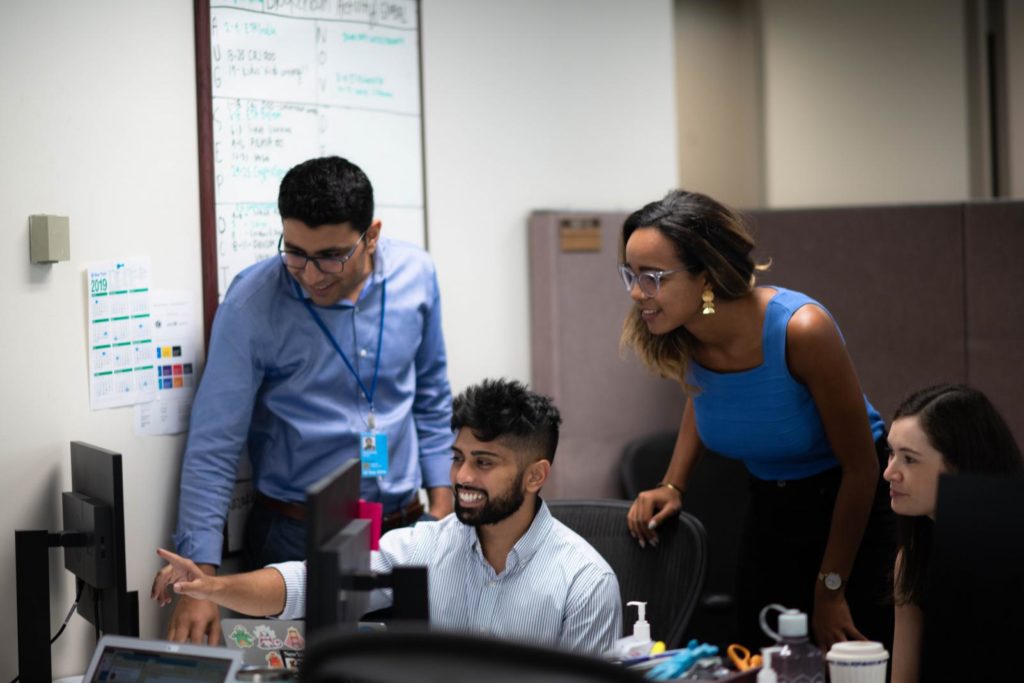 The fund invested up to $100,000 USD in the six companies to deliver open-source prototypes of blockchain applications within 12-months.

Selected from more than 100 applications across 50 countries, these six companies built prototypes and systems for global problems like transparency in health-care delivery, affordable access to mobile phone connectivity, and the ability to direct finances and resources to social-impact projects.

Interestingly, not all of them pursued what they were intending at the beginning. But all of them iterated their solution to make their goals fit the needs that were rising through their execution. 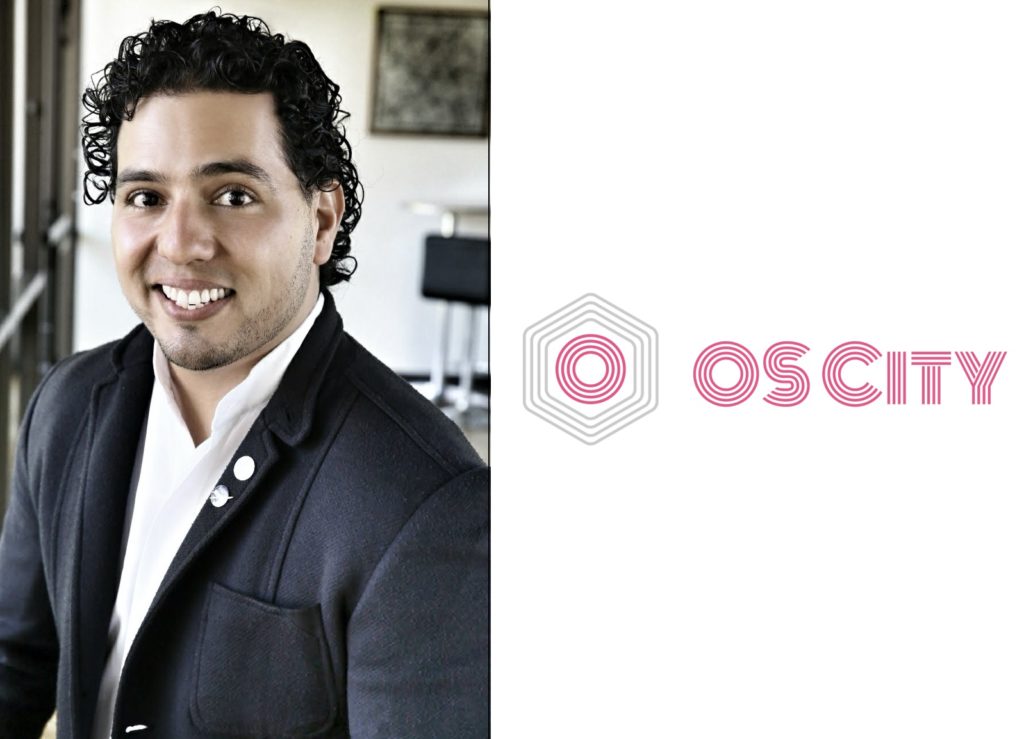 Jesus Cepeda is the founder of OS City whose mission is to accelerate the digital transformation of public administration of government initially in Latin America but now in Spain too.

Prior to COVID-19, OS City’s focus was on facilitating digital transformation within government. Now under COVID-19 and having relocated to Silicon Valley, OS City’s mission is in building the next generation of government with a new governance model for the Ibero-America region. This means that OS City not only provides the technological tools but also the education and skills for public servants to better understand blockchain.

Governments around the world suffer from a level of lack of transparency and efficiency along with a lack of trust. Jesus believes that blockchain can help governments bring transparency in how they make decisions, efficiency in the speed of making those decisions whilst providing trust every step of the way.

OS City’s first project, in helping educate public servants on blockchain, was using blockchain as a database of digital records and digital assets. Blockchain’s key attributes of immutability and being tamper proof is very useful for governments. 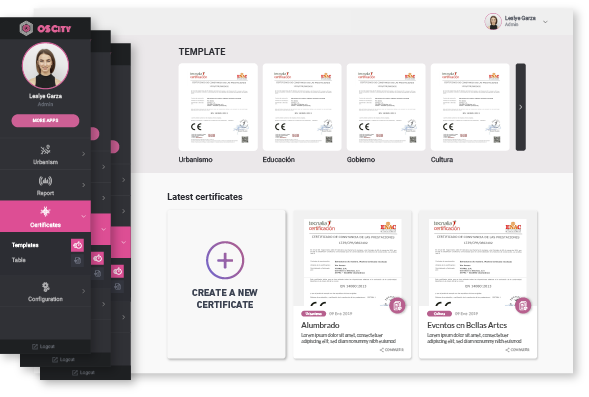 Government subsidies information was the first digital record saved on the blockchain for this project. It recorded the type of subsidy, how money was allocated to it, to whom, its purpose and how it was used. The project expanded to record liquor licenses and construction permits.

These are all examples of digital trustable assets for government information that fosters citizen empowerment and decentralisation of output from government processes. OS City has delivered over 10,000 digital certificates across Chile, Brazil, Argentina, Mexico, Costa Rica and many other Latin American countries.

On the 19th of June, UNICEF’s Cryptocurrency Fund invested 125 ETH in OS City and 7 other startups. With this funding OS City is now developing a new form of digital ID that can perform transactions. For example, the ID could pay taxes only for government services used. 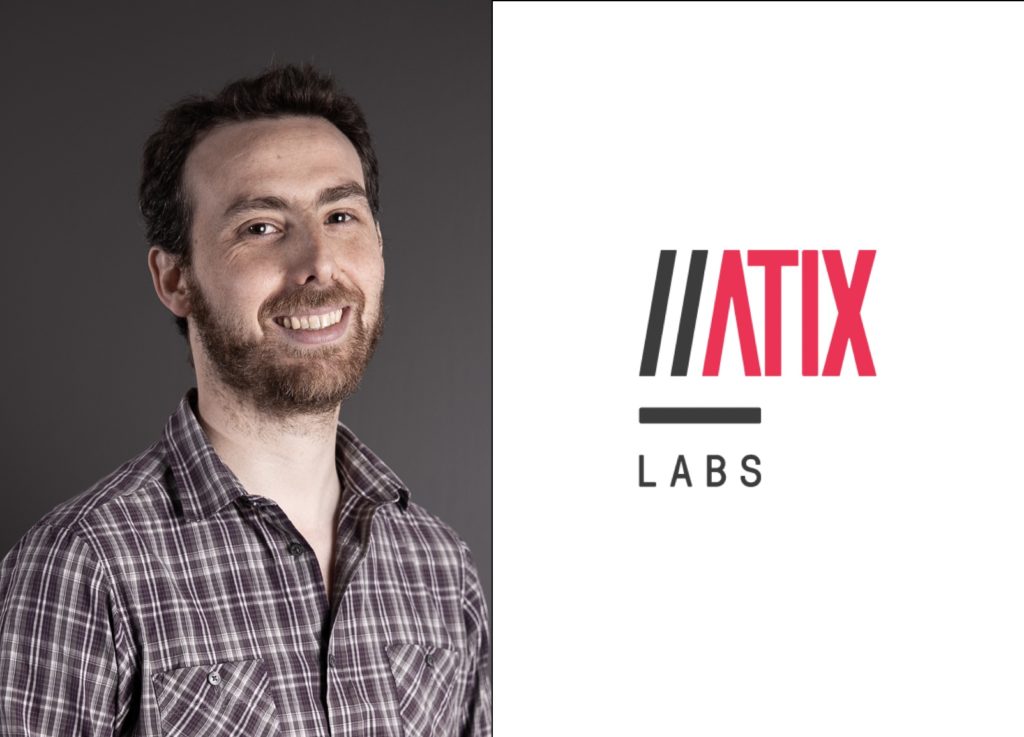 Marcio Degiovannini is the co-founder of Atix Labs, a blockchain development company with 60 professionals based out of Argentina. Their mission is to make the world more reliable and more transparent. They have developed a portfolio of solutions and tools to bring transparency and trust to communities and organisations around the world.

For UNICEF, Atix Labs has developed a blockchain platform known as Circles of Angels, a social impact funding platform that matches small to medium-sized enterprises to funders across the world. Their platform allows social enterprenerus to gain access to funding while creating traceability in where the funds are used all while measuring impact. Their aim is to foster accountability mechanisms and ensure consensus for these stakeholders.

Circles of Angles is a platform that has decentralised the way a project is controlled and how it is updated. For example, the social entrepreneur and funder will agree on a project’s key milestones and attributes. Once a milestone is reached the social entrepreneur uploads the evidence and if it fits within the agreed set of rules, further funding is released by the funder. This process removes the need for a central authority and only the project stakeholders can decide on the evolution of the project in a transparent manner. 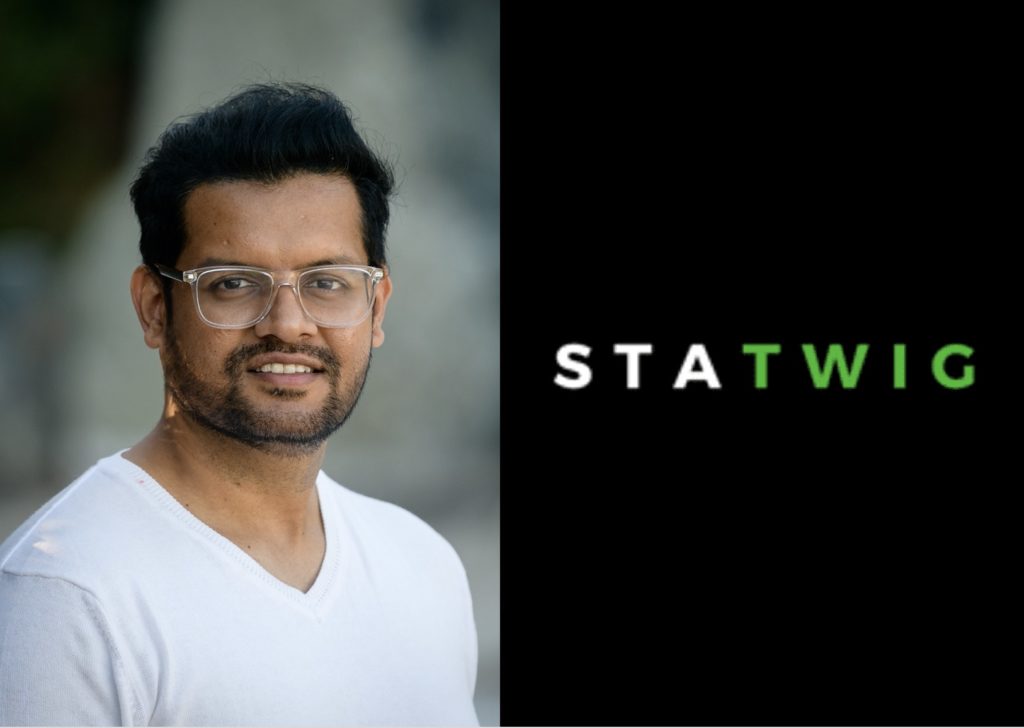 Sid Chakravarthy is the founder and CEO of StaTwig, a blockchain centred supply chain optimisation company, that aligns with the need for transparency and traceability in supply chains, to create trust & transparency among stakeholders. Their solution ensures quality, safety and availability of critical products such as vaccines and food.

StaTwig tracks products at a unique level by creating a digital ID for them once they are manufactured. As the product moves across the supply chain it changes several hands and StaTwig captures the product’s different states in terms of its timestamps, location, temperature which is critical for vaccines and food. The data, along with other key parameters, is recorded onto the blockchain for all stakeholders to know where the product is and what state it is in.

StaTwig is using the UNICEF’s CryptoFund 125 ETH for a rice tracking project, called FoodLedger, for local government in India. The local government procures 200 million bags of rice. Each bag is tagged and its journey is recorded from procurement to distribution. The quality, condition and availability of the bag is recorded every step of the way. Local government officials can get information on the state of rice inventory across different locations for them to be more efficient and more resilient.

With regards to whether or not StaTwig could have built this solution without the blockchain, the answer is with great difficulty. Sid points out that when a vaccine is released would we trust a centralised system to roll out a vaccine to 7 billion people in a fair and transparent manner? 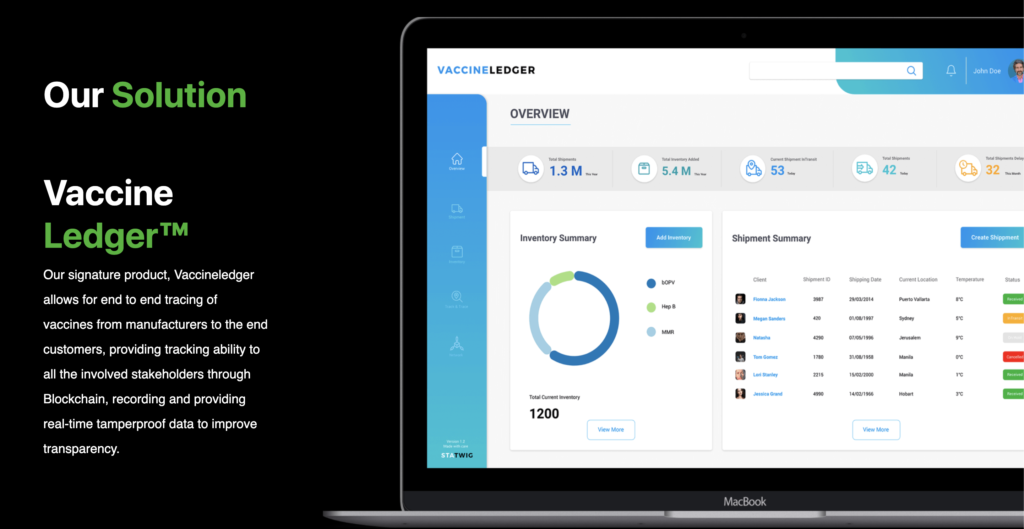 VaccineLedger is StaTwig’s latest initiative which allows for end to end tracing of vaccines from manufacturers to the end customers, providing tracking ability to all the involved stakeholders through blockchain, recording and providing real-time tamperproof data to improve transparency. The platform uses QRcodes printed at unit-levels to track the vaccines from the manufacturer to end-consumer on an open source blockchain platform.

On the 26th of July 2020, the UNICEF Innovation Fund closed applications for its latest cohort. They’ve received more than 500 submissions across 60 countries around the world. For this cohort, UNICEF pushed for gender and geographic diversity as there still is a big gap in female representation in leadership roles in companies. This gap is even bigger in tech companies with women of colour or Latin origins. To date UNICEF has 40% of their portfolio companies that are led by women, but their aim is to reach 50%.

Cecilia points to a fact that 20% of the applications received for this new cohort came from Nigeria which is interesting as the fund doesn’t have any blockchain companies from West Africa. This demonstrated an opportunity for a new blockchain hub in that part of the world.

Her expectation is to select more innovative applications of blockchain, addressing local social problems that are representative of the different regions in the world.

What the future holds and how can you help?

These questions are still not quite answered and more evidence needs to be gathered on the role blockchain can play. UNICEF can’t do this on its own and wants to play with other key stakeholders.

To the Insureblocks community if you wish to mentor, finance or help any of the startups in the UNICEF portfolio do reach out to UNICEF: [email protected]