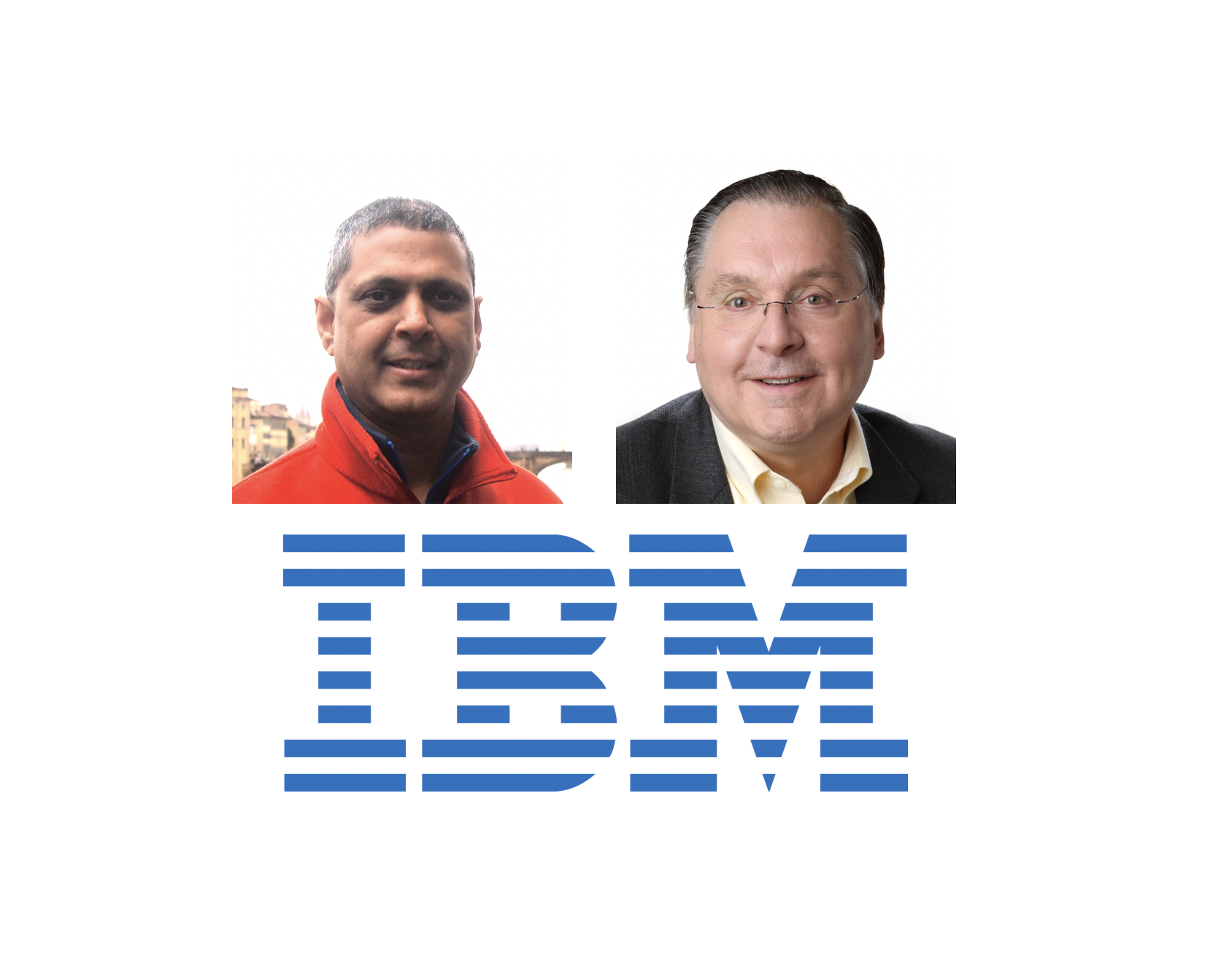 For this week’s episode we had the pleasure to hear about the exciting blockchain work IBM does in the insurance industry and beyond. We very pleased to have Craig Bedell, Global Insurance Industry Executive, and Annap Derebail, Executive Architect Financial Services Sector from IBM, take us through IBM’s journey with Hyperledger Fabric and some interesting blockchain case studies.

Annap chose to explain what is blockchain from an insurance perspective. The insurance industry operates within a network that involves brokers, service providers, regulators, advisory services, other insurance carries and reinsurers. They transact business across this network by exchanging assets that typically historically have been recorded in ledgers or systems of record by each party involved in these transactions.

As they compete with each other they don’t necessarily trust each other. The effect of this lack of trust is that when ledger’s mismatch for whatever reason, either due to error or incomplete updates, businesses would spend considerable time and resources to resolving these disputes or reconciling records.

Blockchain fundamentally brings a shared replicable ledger that records who owns what within a business network so that there are no disputes and records don’t have to be reconciled.

Hyperledger was founded back in 2015 when a number of companies that were working on blockchain realised that they could achieve more by working together rather than separately. They came together with the aim of pooling resources in order to create open-source blockchain technology for anyone to use. The members put the governance under the foundation or guardianship of the Linux Foundation. The organisation now has over 230 member organisations from a wide variety of industries.

According to IBM, there are three key principles, why insurance companies should consider Hyperledger:

Beyond these three key principles there are a set of design principles for enterprises: modularity, security, interoperability, availability of open APIs that enable ease of dealing with these sorts of Hyperledger blockchain frameworks.

Hyperledger Fabric has a modular based platform for building distributed ledger solutions. This is being developed as open source. IBM has contributed about 40,000 lines of code to initially bootstrap the Fabric project. The code is owned and operated by the community. It supports a large number of privacy and confidentiality features that fit all manners of insurance business use case:

Hyperledger Indy is a distributed ledger, purpose-built for decentralized identity. It provides tools, libraries, and reusable components for creating and using independent digital identities rooted on blockchains or other distributed ledgers so that they are interoperable across administrative domains, applications, and any other “silo.”

Fundamentally it aims to answer questions such as:

Biggest opportunities for blockchain in the insurance industry?

Craig see areas for services such as certificates of insurance, claims, subrogation; it’ll be across all of those dimensions as well as the aspects of risk assessment and reinsurance. We’ll see more and more examples of these coming together and connected blockchains as well he believes.

The Netherland Vehicle Licencing Agency (RDW) and IBM have developed an electric bike registration proof of concept, based on blockchain technology, which they call BikeBlockchain. Bike owners can prove their ownership and report the bike stolen through a blockchain enabled application. The smart lock on the bike registers the position of the bike, which is recorded onto the blockchain when the lock is activated. When a bike is stolen the police are able to see the latest position to respond instantly. Insurance companies can use smart contracts to automate their claim handling processing making this much more reliable and efficient. This represents an example of the second biggest opportunity for blockchain in the insurance industry; ability to plug itself into existing blockchain and business networks. 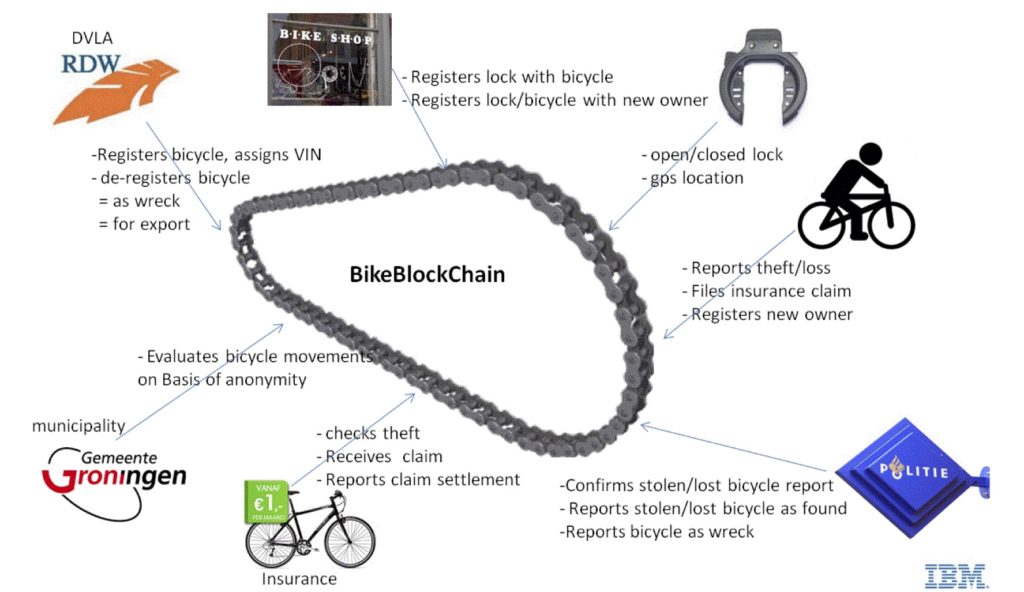 TradeLens is an open and neutral industry platform underpinned by blockchain technology, supported by major industry players. The platform promotes a more efficient, predictable and secure exchange of information in order to foster greater collaboration and trust across the global supply chain.

It is eliminating the significant expense close to 30% of transportation of goods which goes to paperwork and eliminating that paperwork has been a critical component. Adding in open ocean cargo insurance, excess credit insurance and even looking at the custom bond by having those capabilities into a trade blockchain brings substantial efficiency.

IBM’s Food Trust brings together companies like Walmart and Tyson, Nestlé and over 300 other companies to create visibility and accountability in the food supply chain. These companies can now use the blockchain to do product recalls much more efficiently and effectively. A risk manager can address the product recall insurance exposure by immediately seeing the benefits of having the capacity to effectively execute product recalls. They can mitigate their product liability exposure and to some degree even positively improve their directors and officers liability expires.

Blockchain for proof of insurance – Marsh

Earlier this year, Marsh announced a proof of insurance on the blockchain alongside IBM, ACORD, and ISN.

Quite often when a contractor is hired, one of the prerequisites  that has to take place is verifying the validity of their insurance that they are carrying and given that this process was highly manual and time-consuming, it would often cause delays in construction. Projects resulting in loss of revenue across the network for the various players, for example Marsh processes around 15 million certificates annually just within the US.

Is R3’s Corda taking the lead in the insurance space?

Last year, IBM ran  a successful proof of concept and a market test with over 38 insurers with B3i. Recently B3i has made the decision to switch technology platforms to Corda. In IBM’s view these are early days for the technology and as it evolves customers are experimenting with multiple technologies.

As new insurance scenarios arise, new challenges will continue to arise that will provide challenges to every single platform and the advantage that IBM believes it has or with its notion that an open community entered approach within Hyperledger, where there is transparency to the issues that are faced and how those issues get resolved are in an efficient manner becomes very important. Just to prove that point, AAIS, who is working with IBM around regulatory reporting and program development have in fact joined Hyperledger.

There are three points when considering this alliance:

Asked the question if Corda could join, Annap stated that nothing is impossible.

Craig and Annap provided a great overview on the role IBM is playing in developing interesting blockchain solutions for the insurance industry. It was clear IBM has a lot to offer within and outside of insurance. If you liked this episode please do review it on iTunes – your reviews make a huge difference. If you have any comments or suggestions on how we could improve, please don’t hesitate to add a comment below. If you’d like to ask Craig or Annap a question, feel free to add a comment below and we’ll get them over to our site to answer your questions.