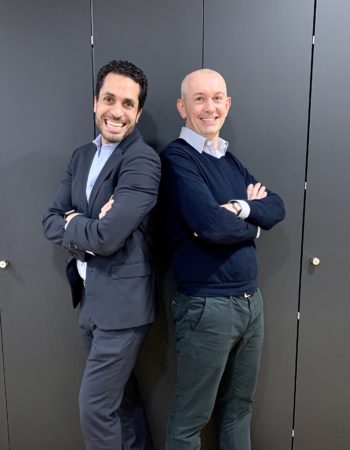 Ep.86 – Real estate on the blockchain – insights from Coadjute 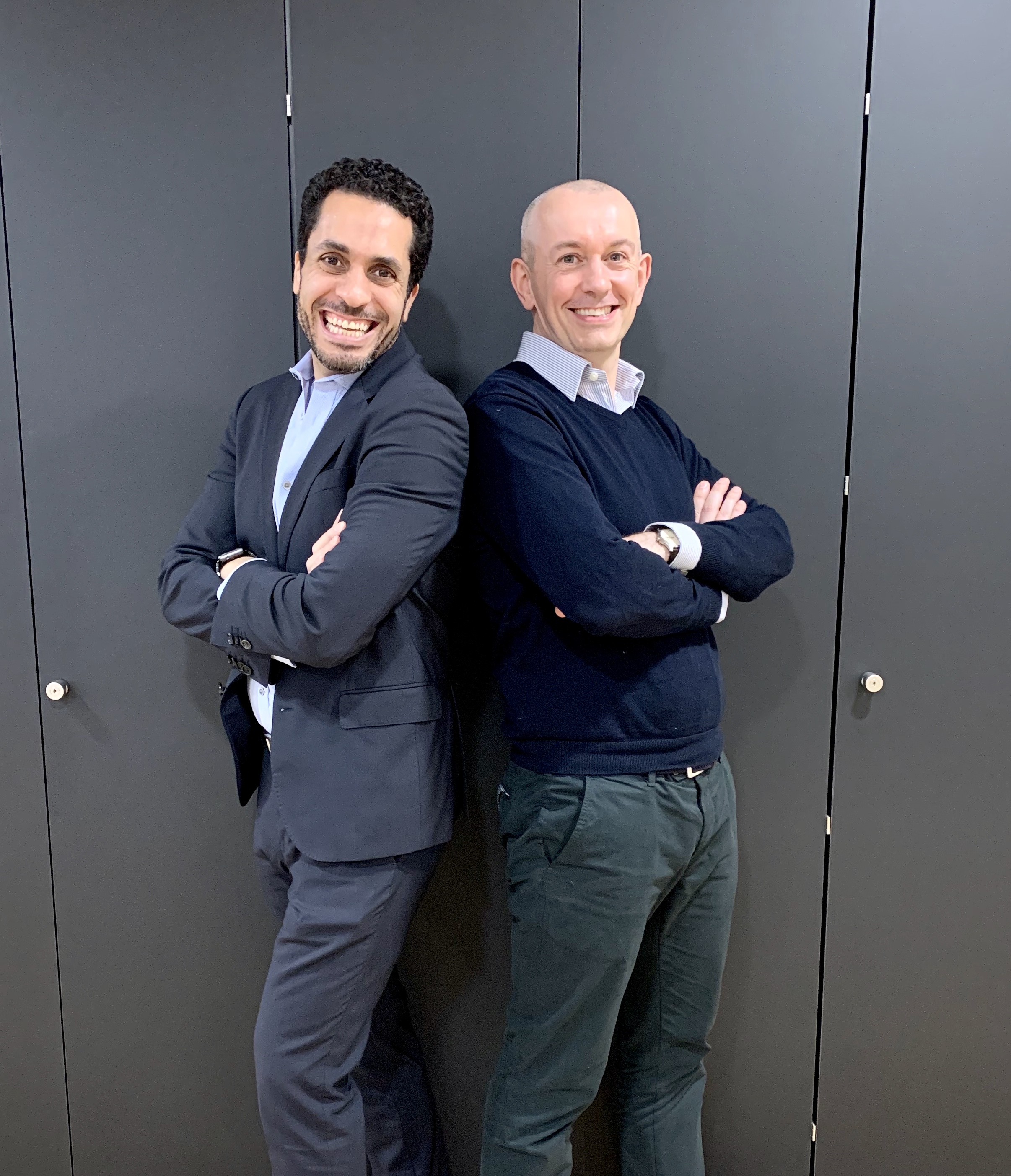 John Reynolds is the CEO and founder of Coadjute. John has a background in enterprise technology and helping organisations optimize internally. In this podcast he talks to us about the exciting blockchain opportunity they’ve unlocked in the real estate and construction industry which is worth $10 trillion globally!

John perspective on blockchain is from a workflow and synchronization angel. Blockchain enables different companies to work together by keeping their different databases to stay synchronized, thus enabling everyone to have the same version of the truth. Coadjute looks at blockchain as an inter-organizational workflow that allows organisations to stay in sync.

Property marketplaces around the world are broken

In April 2019, John wrote an article entitled “Transforming the Real Estate Value Chain: Collaborative Innovation and Co-Operative Delivery”. In the article he states “Property marketplaces around the world are broken. It is slow, complex, confusing and costly to buy and sell both residential and commercial property.”

Anybody who has bought a house would recognize that it is a complex process because the consumer has to engage multiple businesses:

Whilst each of those verticals have digitized and perform their job correctly the process itself is broken because the entire value chain is fragmented and it is down to the consumer to knit it all together. This can take four to five months and could cost 4% of the property value. It is an expensive, frustrating and time-consuming experience for most consumers. At Coadjute they believe that distributed ledgers and decentralized workflows can fix this problem.

Do you really need a decentralized solution?

There has been attempts to build a centralized platform fo the marketplace. In April 2007 the Land Registry invested £4.6m to the “Chain Matrix” a e-conveyancing type platform. It didn’t get the necessary adoption and was ultimately closed down in 2009. 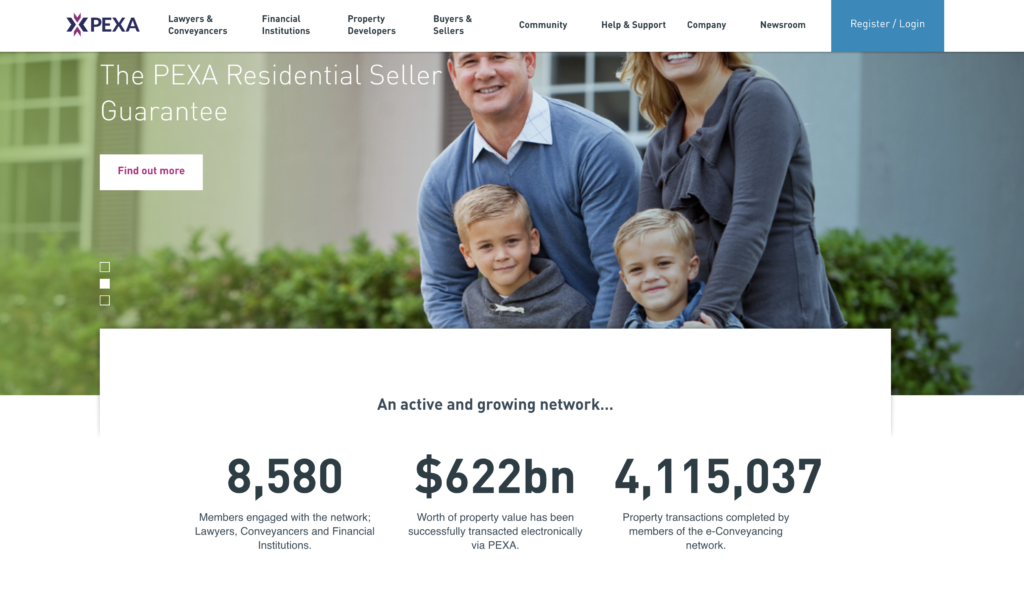 Whilst in Australia the government mandated a e-conveyancing platform called PLEXA which was successfully launched in 2010 and has had over 4m property transactions of a combined value of $622bn go through it.

In the UK and other jurisdictions estate agents have invested heavily in their workflow tool and their internal business processes. Surveyors and conveyancers have their own tools that they have built up over 10 years. Banks have their internal systems. Taking a centralized platform approach would cost significant amounts of money, require heavy regulation which in turn could lead to a number of businesses shutting down. Because of these reasons a centralized approach probably wouldn’t work in the UK.

The API approach is an interesting one but one that still has challenges. How do you synchronize those APIs? How do you set the standards and processes to facilitate the synchronization of those APIs within a group of companies wishing to collaborate?

DLT and smart contracts allows those companies to orchestrate workflow across organisations and then use APIs to connect into their core systems. Essentially the APIs open up the data from the company’s internal systems, DLT keeps the data in synch and enables the automated execution of workflows.

Coadjute initially started off as a research project trading cryptocurrency in an amateur way to understand the underlying technology. John has spent a considerable amount of time in helping businesses and the UK government digitally transform itself. He and the Coadjute team had a hypothesis which was, could they create a distributed ledger that kept government in sync and kept their databases in sync? To answer that hypothesis they started a research project in 2017, spoke at Parliament, presented at the Lords, spoke to many government departments. At the beginning of 2018, the UK Land Registry ran a public procurement to which Coadjute in partnership with R3 and a UK public sector digital consultancy called Methods, placed a bid along with 22 other companies. The challenge the Land Registry had was how can blockchain and DLT technology and smart contracts make the home buying process simpler, smarter and cheaper.

The approach Coadjute took wasn’t to put the Land Registry onto the blockchain but instead to put the workflow between all the parties involved in the home buying process onto the blockchain. Coadjute, R3 and Methods won the bid for this procurement, built a number of PoCs and were delivery partners for the UK Land Registry Digital Street project.

For the purpose of this trial a PoC test was done to see if there is value in a shared ledger for the whole home buying process. Coadjute built nodes for an estate agent, mortgage lender, legal firm, Land Registry, Tax office, and a node right along the value chain. Dummy properties were created and transacted across the value chain. The learnings from this trial were prepared into a full report.

This trial was financed through a joint effort. Coadjute invested their own resources into the trial, R3 invested development resources and Microsoft Azure provided them with a free license to all the participants who all also chipped in to the overall cost of the trial.

Moving from a trial to live production

John explains how the gap from trial to live production is massive because it is all about adoption. One of the participants in the trial, who is one of the largest global estate agents in the world, shared that they had just recently refreshed an internal software platform, thus making it hard for them to move to another platform.

John visited that estate agency software and realized that they had a workflow tool which involved a lot of telephone usage and chasing around of the participants in the whole value chain for buying a property. That’s the moment that John had the idea of becoming a network of platform, of leading platform providers in estate agency, in conveyancing, in mortgage lending and brokering. 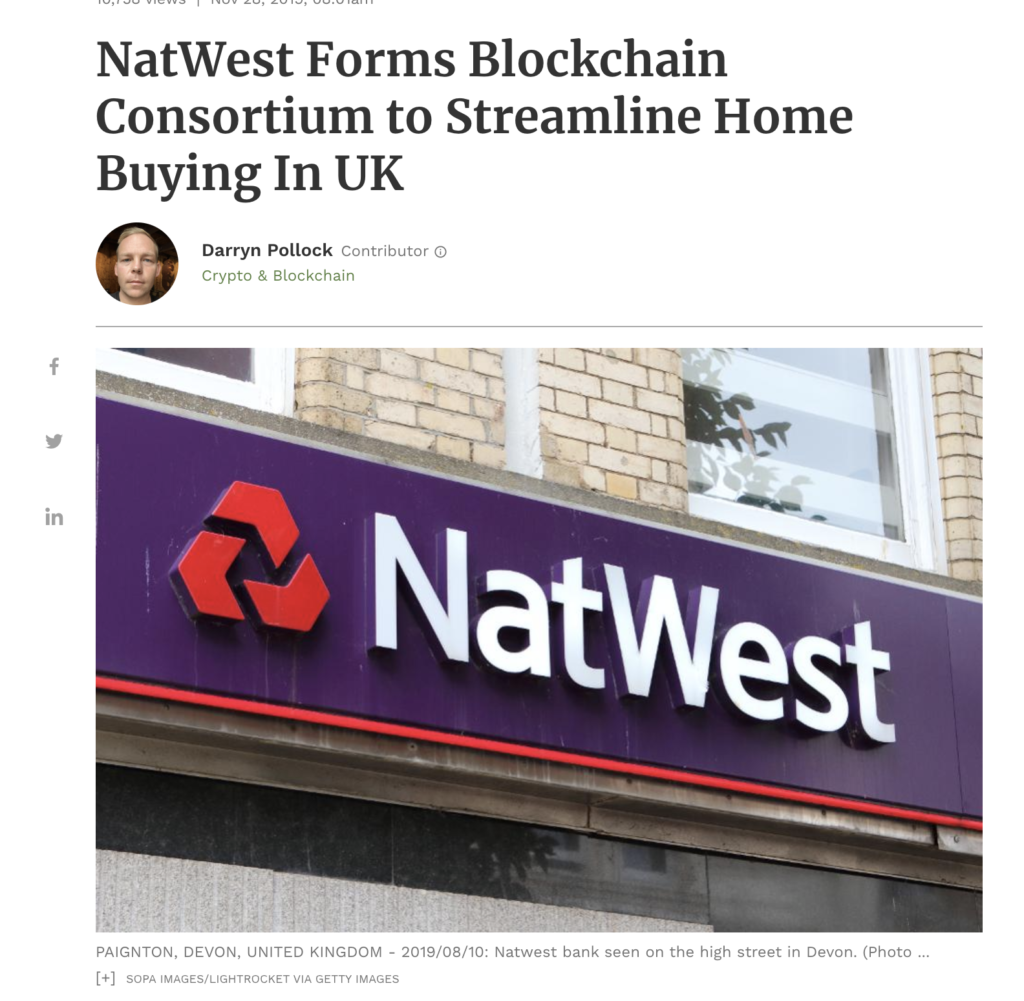 In September this year Coadjute built a consortium together of the leading platform providers in the industry with Natwest being the lender to build a non-production MVP.

All this will be available as a mobile banking app with the promise that you can get a mortgage and move home in one simple online journey.

The Instant Property Consortium is going to do a big industry showcase in February 2020. John states that through the power of consortium you can really drive adoption as he is under no illusion that they could not have brought 3000 estate agents on their own.

In January 2020 they will go back to the consumer to test out their newly designed digital experience with a view to run a pilot with the members of the consortium. The pilot will run shadow transactions. They will run shadow transactions of a consumer going through the home moving experience on a real market infrastructure. This will take about 6 months of building and testing with a view to go live by the end of 2020.

During the original trail in Q1 2019, one of the participants was a housing association who liked the concept of having a digital identity of the property. Coadjute has a smart property record which gets sent to the estate agent, the conveyancer and the rest of the ecosystem.

After the Grenfell Tower disaster and the Hackitt report, a regulator is being set up in the UK for monitoring building safety. The housing association stated that they will need a facility to monitor the gold thread of quality through the construction process. John states that the process for building a home is very similar to the one of buying a home where you have multiple organisations interacting between each other without there being a one stop shop.

John realized that the Instant Property workflow engine and smart property record could be tweaked to address the need of the construction industry. This new product became known as the “Quality Chain” which they prototyped with the housing association and formed a working group called the UK Housing Association Working Group with five housing associations.

Quality Chain is a decentralised workflow tool for the build ecosystem, enabling businesses across the construction industry to collaborate and manage development projects by tracking obligations and delivery along the project lifecycle from inception to occupation. This shared immutable data record provides a single source of the truth as a foundation for trust. The immutable provenance of construction documentation, records and certificates serves to evidence regulatory compliance and facilitate smooth handover to the Owner and Occupier.

Vision for the future

Data is lost, archived or left in siloed databases which means it isn’t being fed into AIs or machine learning algorithms. Liberating that data onto a share ledger enables AIs and machine learning algorithms to develop valuable insights and automation for all participants in the value chain. This data will not only be available in one vertical but along the lifecycle of the property as an asset from building it, buying it and occupying it can be really transformative. The global construction industry is a $10 trillion industry which in the UK alone employs 1.3m people. Yet as an industry it is far behind in its digitization effort. This represents a very large opportunity for Coadjute and PropTech startups.